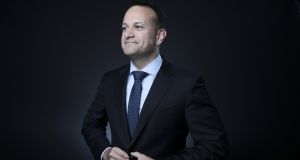 The Taoiseach, Leo Varadkar, and the Minister for Finance, Paschal Donohoe, had their day in the Davos sun yesterday, with both facing down accusations about the Irish tax regime before hosting a dinner with 70 top executives on Thursday night.

Also socialising on Thursday was US president, Donald Trump, who is due to deliver a keynote address at the elite gathering on Friday. Joe Brennan, our man on the ground, will update you on all things Davos throughout the day on irishtimes.com/business. He also reflects today on his weird and wonderful week - including his ineligibility for a selfie seminar - in the Swiss ski resort in today’s Business Agenda.

Back at home, a group of high-profile developers who complained to the European Commission about Nama funding house building are considering their next move after the Brussels authority rejected their challenge. Barry O’Halloran has the details.

Mark Paul reports today that Liam Lynch, the Irish-American investor who recently moved on Norah Casey’s Harmonia magazine stable, could be preparing to add the Sunday Business Post to his burgeoning empire.

And in his Caveat column, Mark raises a glass to the Licensed Vintners Association, which this week handed over more than ¤200,000 raised in a social responsibility collaboration with Alone, the charity that helps older people.

This week’s Business Interview will bring youinside the mind of a hard Brexiteer businessman, with Michael McAleer speaking to Andrew Edmiston, the head of Citroen distributor, IM Group.

Brexit is meanwhile among the challenges to the economy highlighted by the Central Bank in its latest quarterly bulletin. While the Bank expects to seealmost 90,000 extra jobs in the economy over the next two years, it cites the UK’s exit from the EU and changes to international tax policy as shadows in the background.

John FitzGerald meanwhile uses his weekly Economics column to consider how EU membership affects a country’s people, noting a range of data that shows being part of the club has raised the living standards of huge numbers.

And finally, if you have that January feeling that you need a new job, Olive Keogh has some tips on getting your “you” in order before setting out into the market. She also suggests that the whole process could take several months.

Remember to sign up for our business alerts service here.