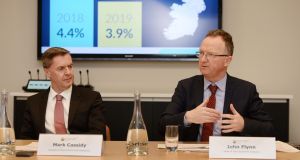 Mark Cassidy, director of economics and statistics and John Flynn, head of Irish economic analysis, at the publication of the Central Bank’s first quarterly bulletin of 2018.Photograph: Alan Betson

The Central Bank says it expects to see an additional 89,000 jobs created in the Irish economy over the next two years, bringing total employment to a record 2.3 million.

In its latest quarterly bulletin, the bank also upgraded its headline growth forecast for the economy for 2018 to 4.4 per cent, citing better-than-expected trading conditions in the euro zone and the US, where president Donald Trump’s tax reforms are expected to boost investment.

However, it cautioned that Brexit and changes to international corporate tax policy cast a dark shadow over the economy here and made the outlook highly uncertain.

“We cannot afford to be complacent as the economic growth we are projecting will not necessarily be plain sailing and is faced by real and varied risks,” said Mark Cassidy, the Central Bank’s new director of economics and statistics.

“The small and open nature of our economy leaves us particularly vulnerable to the present uncertainty in the global taxation environment,” he said, while noting that Brexit remained “the big unknown”.

While the rapid turnaround in growth and employment had increased the risk of economic overheating, he said there were no obvious signs of overheating yet with wages and prices both growing at sustainable rates.

In its report, the Central Bank said the labour market continues to perform strongly, underpinned by strong domestic demand. It forecast employment growth of 2.2 per cent for this year and 1.8 per cent for 2019, which would translate into additional 89,000 people at work.

It said recent research within the bank and the newly published labour market data signalling the labour force is bigger than previously thought suggest the legacy effects of the crisis on the labour market have not been fully resolved and that there is still additional labour supply available.

“This suggests that while labour market conditions are tightening, there is still scope for unemployment to fall further before more significant wage pressures emerge,” the bank said.

Nonetheless, the positive outlook brings the prospect of full employment into view, the Central Bank said, with the unemployment rate projected to decline to just over 5 per cent next year.

It also noted that composition of employment was likely to be significantly different by 2019 with approximately one in 16 workers directly employed in construction compared to one in nine back in 2007.

While the return to full employment is expected to drive up the wage bill, compensation per employee was projected to increase on average by 3.2 per cent this year and 3.4 per cent in 2019, it said.

In terms of headline growth, the Central Bank said the economy was expected to grow by 4.4 per cent this year before falling to 3.9 per cent in 2019 as Ireland gets closer to full employment and growth internationally moderates.

On Brexit, it said output, orders and exports data point to a muted overall response from Brexit-related factors to date, with the most notable impact of sterling weakness, so far, to be seen on inflation.

Reflecting the high proportion of goods imports which come from the UK, the current weakness in sterling has anchored goods price inflation, offsetting higher prices for services and keeping overall inflation subdued.

However, it warned that indigenous sectors and regions which depend more heavily on the UK market remain vulnerable to the changes which Brexit may bring.