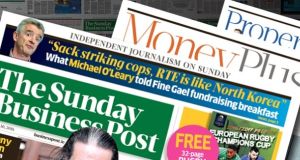 Liam Lynch, the Irish-American investor who last year led a buyout of most of Norah Casey’s Harmonia magazine stable, has become a leading contender to buy the Sunday Business Post newspaper, sources say.

The newspaper and an associated printing plant in Cork, bundled together as Sunrise Media, were put up for sale by their majority owner, Key Capital, last September.

Bidders were told that offers would be entertained for all or part of the business. Mr Lynch is understood to have tabled a bid to buy the newspaper.

Management at Sunrise Media last night declined to comment on Mr Lynch’s interest in the newspaper. The US-based investor, meanwhile, made no response to queries about the Post that were sent to him through one of his Irish-based executives.

He is also the principal behind Studio VC, a venture capital fund that has bought stakes in several technology and marketing-related companies.

When the Harmonia deal was announced, Mr Lynch said he would extend the titles’ digital reach.

In a subsequent interview published in the Post, he confirmed he was actively looking at other Irish media acquisitions.

“There is definitely a lot of Irish media that is up for sale right now,” he told the Post. He also reportedly suggested that he planned to buy three further Irish media brands in 2018, which would be folded into Irish Studio along with the former Harmonia titles and Irish Central.

If he buys the Sunday Business Post, Mr Lynch is likely to further develop the digital side of the business. The newspaper is one of only a handful of Irish publications to charge for online access, with about 3,500 subscribers.

Other potential suitors for the Sunday Business Post are rumoured to include Irish-American telecoms investor, Ken Peterson, and Dublin-based investment firm Broadlake Capital.

The Sunday Business Post has annual revenues of more than €7 million and is profitable, clearing a small net profit of €5,500 in the year to the end of June 2016.

It has a print circulation of close to 30,000 in the difficult Irish print newspaper market, although the Post has fared relatively better than some of its competitors in recent years.