John FitzGerald: Despite post-crisis anxiety, the EU has driven prosperity for its members 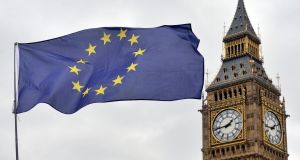 Beginning with the 1973 accessions of Ireland, the UK and Denmark, successive waves of EU enlargement have shown benefits for members. Photograph: Victoria Jones/PA

The economic crisis that began in 2008 affected EU members in many different ways. One of the most important was a loss of confidence among many citizens in the ability of the EU to improve their living standards.

However, even a cursory examination of the data shows that membership of the EU has helped transform the living standards of a huge number of its people.

Beginning with the 1973 accessions of Ireland, the UK and Denmark, successive waves of EU enlargement have shown similar patterns of impact for members. Initially, significant adjustment costs may have arisen. However. in the long run, access to the EU market has allowed new members to grow rapidly and to gradually catch up with the living standards of existing members.

In Ireland’s case, positive impacts of EU membership were delayed by the lost decade of the 1980s, which was brought about by domestic policy failures rather than our EU accession.

However Irish incomes, which had long hovered at about 60 per cent of the EU average, rose rapidly from 1990, and brought us to above the EU15 average by the start of the 2000s. Our membership of the EU was vital in supporting this outcome. Our recovery, following the 2008 economic collapse, leaves us about 10 per cent above average living standards for the EU15.

The Central European countries that joined in 2004 and 2007 have replicated Ireland’s convergence. For them, adaptation began as soon as the Berlin Wall fell and progress was apparent before they formally joined.

Twenty five years ago, these countries had a standard of living ranging between 25 per cent (Romania) and 65 per cent (Slovenia) of the EU15. Today their living standards ranges between 45 per cent (Bulgaria) and 85 per cent (Czech Republic) of the average. In terms of the distance travelled, Poland has been the star performer of this group.

For these more recent members, the economic crisis did not derail progress. All of them have improved their position relative to the EU15 since 2007.

Greece is the exception to this picture of accelerated growth and the gradual catching-up with EU living standards after countries join. Failure by successive Greek governments to adapt the economy to benefit from the opportunities that EU membership afforded it has led to lacklustre progress.

Probably more valuable than the funding itself was the governance attached. This involved guidelines and advice to government on its investment strategy, and accountability for results, which improved domestic decision-making.

For the Central European economies, a crucial factor in their progress has been their integration into the EU supply chain. For example, the more labour-intensive aspects of car manufacturing have moved from Germany to Poland, Slovakia, and Hungary.

German workers have not suffered because they still do the most skilled work. Because of this division of labour, German car manufacturers became more competitive, giving a win-win across the EU for all those employed in the industry.

Recent research shows that living standards of poorer regions across the EU have also tended to converge on the EU average. However, this convergence is weaker than at a national level. Indeed poorer regions in southern Europe (including those in Spain and Portugal) have actually reversed in relative terms over the last decade.

For Central Europe, the pattern is rather different. Some regions – the Bucharest region in Romania and the Bratislava region in Slovakia – have made exceptional progress. Interestingly, both these regions contain the national capital. The differential performance of individual regions within states shows that rapid growth tends to be driven by the presence of important cities.

Economic and Social Research Institute research published this week also makes the case for Ireland that strong cities are necessary to generate strong regional growth. Strengthening cities like Cork, Limerick, Galway and Waterford will be the key to balanced regional growth in Ireland.