Margrethe Vestager will be the ‘nemesis’ of social media giants, billionaire predicts 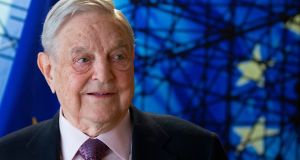 George Soros was speaking in Davos on Thursday. Photograph: Getty

George Soros said Facebook and Google are almost monopolies and have purposely fostered addiction among users.

“They deliberately engineer addiction to the services they provide,” Mr Soros said in a speech in Davos, Switzerland on Thursday. “This can be very harmful, particularly for adolescents.”

The Hungarian-American billionaire investor compared the internet platforms to gambling companies, and said they may be permanently damaging human attention. Overseas, Mr Soros said he’s concerned that some social media and technology companies may fall into “unholy marriages” with regimes in Russia and China, creating a “web of totalitarian control.”

Facebook and companies from Twitter to Apple have been confronting a mounting public backlash against technology and social media, as the public grapples with a constantly connected life in which they are exposed to fake or biased news, cyber bullying and even internet addiction.

Soros believes the monopolistic dominance of these companies will soon be broken by regulation and taxation, and that European Union competition chief Margrethe Vestager “will be their nemesis.”

1 Basic income for all: Has the Covid crisis given us a new economic model?
2 Direct sea routes to Europe offer certainty in choppy Brexit waters
3 Only way is up for Stripe as valuation skyrockets
4 Admission of mistake in Oxford vaccine dose raises doubts over reliability
5 ‘I don’t need to do any of this. . .I don’t actually need to work.’
Real news has value SUBSCRIBE