Davos: Leo Varadkar cites European past in which big countries over-ran little ones 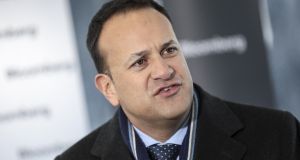 Leo Varadkar in Davos on Thursday: “America made itself great by trading and accepting migrants from all over the world.” Photograph: Simon Dawson/Bloomberg

Taoiseach Leo Varadkar signalled on Thursday that a rejuvenated Franco-German alliance would face opposition if decisions on the future of the European Union were made in Paris and Berlin and effectively imposed on smaller states.

Speaking on a Davos panel discussion about the future of Europe, Mr Varadkar said he would welcome it if France, with a new outward-looking president in Emmanuel Macron, and Germany, where chancellor Angela Merkel is seeking to form a fourth-term government, re-established an “engine” to drive the EU project forward.

Mr Varadkar said that Europe “was at its best” between the mid-1980s and mid-1990s when François Mitterand led France and Helmut Kohl led Germany, while Jacques Delors was president of the European Commission, driving projects such as the euro and enlargement of the union.

“That wouldn’t have happened without that Franco-German alliance,” he said. “But I am also cautious about the Europe of the historical past . . . where large states went to war on occasion and very often over-ran smaller states.”

The Taoiseach added: “We don’t want to see meetings in Paris and Berlin that only countries with more than 40 million people are invited to attend, and the smaller countries being told afterwards what’s good for Europe.”

With the UK set to exit the EU, smaller “free trader countries” that believe in “low taxation generally” will need to work together and build new relationships and help shape the future of Europe, he said.

Mr Varadkar said that as the current US administration steps back from free-trade agreements and the UK leaves the EU, Europe needed to take a greater role in the world. He reiterated his support for Europe to establish a “Marshall Plan” to help Africa, in much the same way US assisted in the rebuilding of western European economies after the second World War.

“We’ve already seen the consequence of Libya failing as a state,” he said.

“There were enormous humanitarian consequences for the people of Libya and a very negative effect on Europe. If a much larger African state were to go the wrong way, imagine the crisis and imagine the impact on Europe. It is in very much our interest that Africa succeeds in the 21st century. We’ve a responsibility to make that happen.”

When panellists were asked if they could help write the keenly awaited speech of the US president to the World Economic Forum gathering on Friday, Mr Varadkar said he would like an “acknowledgment” from Donald Trump about the US’s history “by and large of being a force for good in the world”.

“America made itself great by trading and accepting migrants from all over the world,” he said. “It’s a country . . . that saved the world from fascism and then from communism. When America disengages from the world, it doesn’t live up to those very American values and the world becomes a more dangerous place – and a lesser place.”