Cantillon: Philip Lane and Sharon Donnery could be in frame for looming ECB jobs 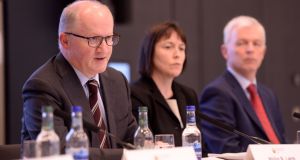 The Government is facing an interesting game of poker, as a string of top jobs come up at the European Central Bank over the next two years. The first decision must be made shortly and it is whether to nominate an Irish candidate to replace ECB vice-president Vitor Constancio, whose term is up in June. Four other senior roles, culminating with the post of ECB president, will come up before the end of 2019. The Government will be keen to get Ireland’s first appointee to the executive board of the bank as part of all this, but picking the right person to nominate for the right job will be essential.

Philip Lane, the governor of the Central Bank, is seen as a strong candidate in regulatory banking circles, and might be a strong runner for the position of ECB chief economist, a job due to be vacated by current incumbent Peter Praet in the middle of next year.

Also in the frame for one of the top jobs could be Central Bank deputy governor Sharon Donnery, appointed to her current position in January 2016. She is also well-thought of in Frankfurt and could benefit from the ECB’s drive to get more women into top jobs – and pressure from the European Parliament, which must approve senior appointments, to do so.

EU finance ministers will kick off the process of replacing Constancio by seeking nominations for the job when they meet on Monday. Minister for Finance Paschal Donohoe is remaining tight-lipped on whether he will put forward an Irish candidate and will have a couple of weeks to take the political temperature and announce a decision. The current favourite is Spanish economy minister Luis de Guindos, though there could be some opposition around Europe to a political appointment.

There has been some speculation that Donohoe could decide to keep his powder dry this time, if he feels the Spaniard is a hot favourite. However, it is likely that soundings will be taken before a final call is made.

Central banks have introduced new rules and probity regulations for any senior appointments in banking, but the top jobs in the ECB are, ironically, decided by old-fashioned political haggling. Like an Irish cabinet, the jobs will have to be divided up between different regions. And gender balance will be seen as a big issue.