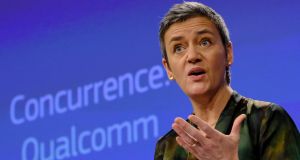 Developers accused the European Commission of missing the point after Brussels ruled against their challenge to the Government decision to allow State assets agency Nama to fund house building.

“It has acted as a private operator would have done, and in line with its objective to obtain the best possible financial return for the State and Irish taxpayers,” she said.

Mr O’Flynn said that the developers would decide on appealing after seeing Ms Vestager’s decision which the European Commission pledged to publish as soon as possible.

“We only have the press release,” he said. “We will consider all the options when we have seen the full decision.”

“The press release asks more questions than it answers, it looks like the main thrust of our complaint was ignored,” Mr O’Flynn added.

The commission said that Nama had fully complied with a 2010 ruling approving state aid for the agency.

However, the developers said they were not concerned at this, but at the Government’s decision in 2015 to use Nama to fund house building.

“This has not been addressed at all in the decision,” they said in a statement. “This is most alarming and undermines the credibility of the decision.”

They added that legal and economic advice supported their claim that the Nama funding plan was illegal state aid. The group hired UK- and Brussels-based economists, Oxeera, to carry out a review for them.

Mr O’Flynn pointed out that Nama was set up to save the Irish financial system and nobody at that point could have predicted it would be funding housing developments by 2015.

Commission spokesman Ricard Cardoso stressed that it had fully assessed the arguments made by the five developers in their complaint.

“All the evidence, including internal Nama documents, points to the fact that this transformation which would offend the commission’s state aid rules has already occurred,” they said.

The commission said Nama analysed in each case whether it was more profitable to sell a site directly or to loan money and develop the property before disposing of it.

“Therefore, the commission concluded that property developers funded by Nama are not receiving any undue advantage,” it said.

The Fianna Fáil-Green Party coalition established Nama in 2010 to bail out Irish banks which collapsed following a lending spree that inflated a property bubble which burst in 2008.

In 2015, the then government proposed that Nama lend up to €4.5 billion for home building to debtors or receivers appointed by the agency over suitable properties.

Opponents warned that as a State body, Nama’s borrowing costs were a fraction of theirs, giving the agency and the businesses it backs an unfair advantage over competitors raising cash from the private sector.

Nama-funded businesses hope to get permission to build 8,500 new homes this year. Since 2014 they have built 7,200 houses and apartments and begun working on a further 2,500.

The agency intends to back the construction of 3,500 homes on the Irish Glass Bottle site in Dublin, which is likely to be one of the biggest new residential developments in the Republic.

Nama welcomed the European Commission’s ruling. It vowed to press ahead with funding home building and maximising the returns from sites under its clients’ and receivers’ control.

Last year, Nama’s chairman, Frank Daly, indicated that the agency could continue past 2020, the year in which it was originally thought that it could be wound down, having completed the task for which it was established.