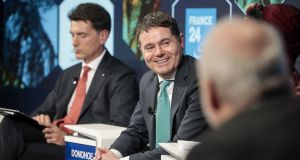 The Minister for Finance Paschal Donohoe rejected claims at the World Economic Forum (WEF) in Davos that the Republic was driving a tax “race to the bottom”, as he and Taoiseach Leo Varadkar prepared to court about 70 global executives at a dinner in the Swiss ski resort.

Nobel prize-winning economist Joseph Stiglitz said on a panel discussing tax avoidance that European Commissioner Margrethe Vestager is a “real champion” for pursuing the Apple tax case, in which her office found in 2016 that Ireland provided €13 billion of allegedly illegal tax aid to the iPhone maker. The Government and Apple deny this and are appealing the finding.

Mr Stiglitz said that the State has been a key player in a “race to the bottom” and that mounting competition between countries internationally – including a recent tax shift by the US – will not end until company tax rates globally “end at zero”.

The comments came a day after French president Emmanuel Macron pointed to Ireland luring overseas firms through ultra-competitive corporation tax as he complained at the WEF gathering about the lack of tax harmonisation in the European Union.

“The contention that national tax policy should be set by national governments to allow them to fund national services for their own citizens is a proposition that has support all over the European Union,” Mr Donohoe told reporters in Davos.

“Ireland will continue to address matters in relation to corporation tax policy to ensure that our code is consistent with global best practice.”

However, the hottest ticket in town on Thursday evening was a dinner thrown by US president Donald Trump ahead of his much-anticipated address to the WEF on Friday, where the guestlist included European chief executives and chairman from companies such as Addidas, Nokia, HSBC and Statoil.

Separately, the Taoiseach told reporters that he doesn’t think that there is a bubble in the Dublin commercial property market, responding to comments from businessman Denis O’Brien on Wednesday in Davos that there was an unsustainable level of development in the capital, and that there won’t be enough workers to put into the buildings being developed.

Mr Donohoe added: “The Government, and I as Minister for Finance, believe that the supply of office space that’s going on in Dublin and elsewhere is needed and justified.”

He said that demand is being driven by expanding economic activity in Ireland and the fact that Ireland expects – and is seeing – an “expansion in commercial activity, post-Brexit.”.

The Minister said that the Government moved in the last budget to triple stamp duty on commercial property transactions to 6 per cent “to ensure that pricing that can happen in the future would be more justified” and help divert property market investment “into building homes for our people”.

Meanwhile, the Taoiseach said that he would like to see the UK’s future relationship with the EU to be closer than that of non-EU member Norway, or what he called “Norway-plus”.