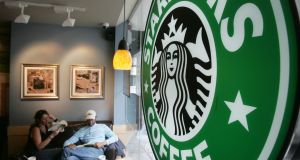 Starbucks said on Thursday that new US corporate tax cuts will boost its bottom line this year but that closely watched sales growth in its US-dominated Americas region missed expectations in the first quarter.

However, sales at established Americas region cafes in the quarter to December 31st were up just 2 per cent, falling short of the 3.3 per cent rise expected by research firm Consensus Metrix.

Starbucks has expanded rapidly across Ireland in recent years, with the coffee franchise controlled by brothers Colum and Ciarán Butler. The brothers also operate TGI Fridays and Leisureplexes in Dublin and recently acquired the iconic kiosk in Dublin’s Ballsbridge. – Reuters

1 Basic income for all: Has the Covid crisis given us a new economic model?
2 Only way is up for Stripe as valuation skyrockets
3 Admission of mistake in Oxford vaccine dose raises doubts over reliability
4 ‘I don’t need to do any of this. . .I don’t actually need to work.’
5 Direct sea routes to Europe offer certainty in choppy Brexit waters
6 When the levees break: consumers pay nine levies
7 Why Lehman Brothers was allowed to fail
8 Brexit stumbling blocks persist as Barnier travels to London
9 White knights or loan book cannibals – what will happen at Ulster Bank?
10 How long can Government afford to keep State pension age at 66?
Real news has value SUBSCRIBE