Dublin pubs putting the ‘social’ back into corporate responsibility

Caveat: Friends indeed as bicentenary worth of funding goes to help Alone 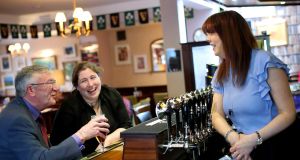 Corporate social responsibility (CSR) must be one of the dullest concepts in the grey, brain-deadening lexicon of business gibberish.

Why would you want to take such a joyous notion (showing care for your community) only to bludgeon the love out of it by making it fit a neat definition to suit some management handbook for MBA clones?

Admittedly, this may be an overly jaded view, even if it is borne out of weariness at the blatant conspicuity of much corporate giving (CSR is the equally boastful cousin of PR).

And, of course, those who need help will benefit from whatever assistance they can get, even if the giving is primarily motivated by a desire to make a business look good.

But as joyless as the concept can seem, CSR – when businesses give to charity or raise awareness about important social issues – is important. Not just to those who receive, but also for the businesses who give.

CSR reminds businesses that we and they all exist within a society, and that they have a responsibility not to bugger up that society if they want to keep on in business.

When beer is involved, however, the normally bland world of CSR gets a whole lot more interesting.

Business that sell alcohol take more flak than most over CSR, on the basis that their core product is open to such abuse by some in society. Dublin publicans have shown over the last year, however, how an innovative and well-conceived CSR campaign can galvanise a whole sector behind a worthy cause.

The Licensed Vintners Association (LVA), the trade and lobbying body for 550 pubs in the capital, was 200 years old last year. It sought a suitable way of marking its bicentenary and leaving a legacy.

“Our members worked off this notion that the city has been good to us, so we have to find a way to give back to the city,” explained Donall O’Keeffe, the LVA’s chief executive, over coffee in the Brazen Head on Dublin’s quays this week.

“The members had this notion that we had to raise €200,000 for charity to mark the 200 years. But how? We were throwing around ideas about how to tackle homelessness, how to help older people. And then the plan was formed.”

In an idea that married the needs of the city with the core business of its members, the LVA teamed up with Diageo to market a new pale ale, Dublin Amber.

The idea was to get the beer installed on draught in as many Dublin pubs as possible for a fixed period. It was decided that 50 cent from each pint sold (25 cent from the publican’s margin, and 25 cent from Diageo’s) would be donated to Alone, which supports older people who are homeless, isolated or lonely.

About 250 Dublin pubs took an Amber tap when the initiative was launched last March, with the aim of raising €200,000 by the end of the LVA’s bicentenary year in December.

About 280,000 pints were sold (raising €140,000) by the target date. O’Keeffe explains that there was a lull in Amber sales in the summer, but it picked up as the year drew on and publicans rallied behind it ahead of the target date.

“We thought we would never get there in the summer. But the cut-off date really helped to focus people’s minds. It became a challenge,” says O’Keeffe.

Yet, they were still on course to fall short of the target. O’Keeffe says word spread among publicans, and many started holding their own separate fundraising drives – holding events such as sponsored walks and auctions.

“That raised another big chunk. Then individual publicans started writing cheques as the target drew near. Some of them might have been guys who didn’t take on a tap and wanted to do something. One guy gave €7,000, another €5,000, others what they could afford,” says O’Keeffe.

By the end of the year, the LVA’s members raised €204,000 – a bicentenary’s worth, with enough left over for a tip. The formal handover of the cash to Alone was marked at the Brazen Head on Wednesday morning.

Sean Moynihan, chief executive of Alone, explains that half of the cash will be used to pay for housing infrastructure. The other half will be used to train volunteers who “befriend” lonely older people.

“ We see ourselves as a social enterprise. We are there to help solve a problem in society and we have to innovate to do it,” says Moynihan.

Alone plans to increase the number of trained volunteers from 700 to 7,000 over the next five years. Dublin publicans, in partnership with Diageo, have given the organisation a sizeable fillip to its budget to enable it to do that. And all by engaging in their core business – selling drink to customers.

That’s certainly a social way of showing responsibility, and one worth raising a glass to.

Almost a decade on from the collapse of Lehman Brothers, documents and lists of claims are still rolling in as part of the institution’s formal bankruptcy proceedings in the US.

There, among the list of declared creditors to date, is Intuition Publishing, the e-learning business founded by Dermot Desmond.

It turns out that Desmond’s company sold services to Lehman staff including the provision of technology-led training packages for a variety of topics such as financial analysis, regulatory compliance and risk management (maybe, given what happened to the bank, Lehmans’ top brass should have listened more attentively during that particular module).

Intuition filed a claim for €1.5 million, a not inconsiderable sum for any company.

The latest returns to the lobbying register shed further light on the intensity of lobbying of the uppermost echelons of the Government by US tech multinationals in Ireland.

They all, of course, want to get in a room with Taoiseach Leo Varadkar. By and large, he seems open to their advances. Between September and December alone, Varadkar met Microsoft for a “business update” and Amazon for a presentation on “the scale and depth” of its investment in Ireland.

He also met Google on several occasions, the returns suggest, to discuss everything from data privacy to EU rules (or the lack thereof) concerning the digital single market. Google also met scores of other powerful State officials.

Airbnb lobbied the Government hard on the regulatory environment for the platform, although it had to make do with Minister for Housing Eoghan Murphy.

Meanwhile, Varadkar, Paschal Donohoe and Simon Coveney all sat through a meeting with Bono about development aid.That was a beautiful day, no doubt.