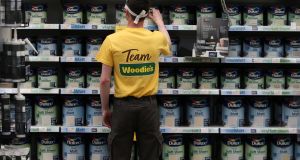 Building materials group Grafton said revenue and profit rose in the four months to October 31st, finishing the period ahead of expectations.

The group also raised its guidance on adjusted operating profit for the second half of the year, raising it to between £130 million (€145 million) and £140 million (€157 million).

Reduced spending on travel, leisure and hospitality may have contributed to increased spending on household maintenance, the group said, with pent-up demand during lockdown also providing benefit.

Grafton’s net cash position before lease liabilities was £150 million at the end of October, up from £58.6 million on June 30th.

Group revenue for the 10 months to October 31st in continuing operations declined by 9 per cent to £2.07 billion as the second-quarter impact from the pandemic was partly offset by an improvement in trading in the four months to the end of October.

Despite the significant disruption caused by the pandemic in the second quarter of the year, demand was strong at the company’s Woodie’s DIY business in Ireland, while the residential repair, maintenance and improvement (RMI) markets in the UK, Ireland and the Netherlands proved resilient.

“The group leveraged its well-established trading positions in these markets and benefited from investments made in recent years in its higher-margin businesses, including the accelerated rollout of its digital strategy,” said Grafton.

In Ireland, the Chadwicks branch network increased average daily like-for-like revenue by 11 per cent over the four months as strong demand in the residential RMI market in Ireland and a recovery in house completions drove demand. However, lower volumes in the commercial construction and civils segments of the market offset this.

The group said it was on course to deliver a strong performance for the second half following a higher-than-expected level of operating profit for the four months to the end of October.

“Despite all the current uncertainties, we are very encouraged by the trading and financial performance of the group over recent months,” said Gavin Slark, chief executive of Grafton Group. “Grafton is in a very strong financial position and has a diversified portfolio of market-leading businesses with exposure to residential RMI, leaving it well placed to benefit from current market trends.”