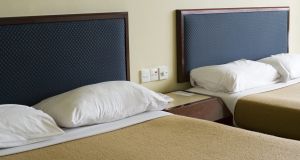 Planners have given the go-ahead for a 95-bedroom hotel in Dublin’s Liberties.

Planners have given the go-ahead for a 95-bedroom hotel in Dublin’s Liberties.

Raag Hotels, a joint venture between Britain’s Queensway Group and the €30 billion Wellcome Trust, confirmed on Monday that it has received permission to built a 95-bedroom property on St Augustine Street in the capital.

Raag’s low-cost Point A division will run the new hotel, which will be the second to operate under this name in Dublin when it opens.

The joint venture is preparing to open its first Point A hotel on Parnell Street on the city’s northside in April 2021.

Joe Stenson, group development director, Queensway, said the company was “delighted” to confirm that it was opening a second Point A hotel in the capital.

1 How to gift your child a house deposit . . . tax free
2 BOI customers to be charged twice with bank fees on New Year’s Eve
3 Digital bank N26 targets one million customers in the Republic
4 Irish designer of Oxford vaccine: ‘I’ve never worked so hard in my life’
5 Son putting elderly dad under pressure to sign over land
6 Workers have little idea of the cost of retirement income
7 O’Flynn and BlackRock to double money with €100m sale of former HP campus
8 Apple security chief charged with bribing police for gun licences
9 Greencore completes £90m share placing as profits plunge 81%
10 We continue to ignore massive pensions elephant in the room
Real news has value SUBSCRIBE