Move would ‘stimulate the economy and deliver much-needed infrastructure”. 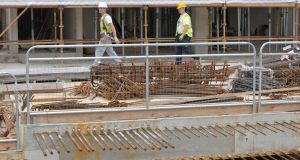 Professional body Engineers Ireland says in report published on Thursday that the Government should increase spending under the plan by €25 billion to “stimulate the economy and deliver much-needed infrastructure”.

Government should boost spending on the National Development Plan by €25 billion to build infrastructure that the Republic needs, experts say.

Project Ireland 2040, the National Development Plan that runs from 2018 to 2027, pledges €116 billion for transport, water treatment, energy and other projects needed for the future.

Professional body Engineers Ireland says in report published on Thursday that the Government should increase spending under the plan by €25 billion to “stimulate the economy and deliver much-needed infrastructure”.

Central to the report are calls for investment to support green energy and cut the Republic’s carbon dioxide emissions, which are still ahead of levels agreed with the EU and other international treaties.

Engineers Ireland’s report, The State of Ireland 2020, says that the electricity grid will need new capacity and interconnectors to allow it take on more renewable energy.

Their document also echoes other calls for the State to identify a seaport suitable to service the offshore windfarms that several large European energy groups plan to build in the Irish Sea in coming years.

The engineers highlight three laws dealing with marine planning, housing and water abstraction that the Oireachtais should enact to speed up key developments.

Their report says Government should “actively manage public land, through the mechanism of the Land Development Agency and/or other means”.

They warn that the coalition should ensure that State and semi-State bodies have enough resources to provide the new infrastructure that the Republic will require for the future.

1 Revenue publishes list of companies tapping State for wage support
2 107 jobs at risk as Broderick’s shareholder considers examinership
3 Bake-off soy sauce tweet backfires for UK trade ministry
4 Will remote working become the norm?
5 Corporate America is breaking with Donald Trump
6 How long can Government afford to keep State pension age at 66?
7 Trump vs Biden: Stakes are high for the Irish economy
8 NatWest CEO declines to give timeline for Ulster Bank decision
9 Stripe moves payment processing to Dublin due to Brexit
10 PTSB’s €1.4bn sale is a sign it is preparing for a fresh loans crisis
Real news has value SUBSCRIBE