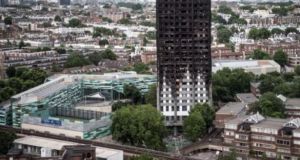 Irish insulation manufacturer Kingspan has withdrawn fire-test reports for one of its key products, after admitting the test had “shortcomings” and does not reflect the product it has been selling for the last 15 years.

The admission came at the inquiry into the June 2017 Grenfell fire disaster in London where 72 people died.

The company was this week accused of “unrepentant arrogance” by a lawyer representing victims and survivors at the public inquiry in London.

Kingspan last week wrote to the Building Research Establishment, which carried out testing on Kooltherm K15 insulation board, to withdraw test reports it has used in its marketing since the product was launched.

The insulation has been used on thousands of developments in Britain and Ireland since it was introduced to the market in 2005.

Kingspan is one of three companies, along with Celotex and Arconic, whose insulation was used on Grenfell tower which was refurbished at a cost of almost £10 million between 2012 and 2016. Each product had to pass a test and obtain certification that it was safe.

The Cavan-headquartered company, which made a €497 million trading profit on revenues of €4.7billion in 2019, has accepted K15 was used in the tower block.

Kingspan maintains it only learned after the blaze that Kooltherm had been used on the project and that it came from a distributor that supplied contractors working on Grenfell’s refurbishment, not from the company itself.

Lawyers for bereaved families and survivors of the Grenfell fire have noted that Kingspan changed the composition of K15 a year after it was introduced, and claimed that the new product had “a poor performance in fire”.

Kingspan said it had recently reviewed K15 and identified “process shortcomings”. “These shortcomings fell short of the high standards which Kingspan sets itself,” it said in its submission to the Grenfell inquiry last week.

Referring to a failed 2007 fire test, Kingspan said this was where the reconstituted K15 was tested with a cladding system that later failed a separate test using non-combustible insulation material from another company.

Richard Millett QC, who is leading the inquiry, asked why Kingspan had not withdrawn the test it relied on in its marketing sooner, given “the inquiry has been actively pursuing this line of investigation with Kingspan for some two years”.

Stephanie Barwise, QC, representing the Grenfell survivors, at the inquiry, described Kingspan’s actions since the fire as “unrepentant arrogance [which] is truly chilling”.

“It is all too clear that the manufacturers whose products were used at Grenfell were untroubled by the safety of their products and some of them remain so despite the disastrous fire,” she said.

“It is of great concern that, even now, Kingspan seeks to trivialise its wrongdoing and despite compelling evidence to the contrary,” Ms Barwise added.