Player Wills site could fit up to 1,400 dwellings, developer says 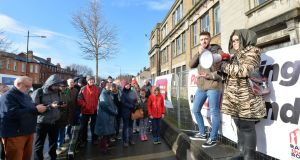 A public rally at the Player Wills site last January called on the Government to issue a compulsory purchase order and utilise the site for public housing. Photograph: Alan Betson

Property group Hines and Dublin City Council could build up to 1,400 homes on one of the few available plots of development land close to the capital’s centre.

The developer and Dublin City Council, which owns the site separating the Player Wills and Bailey Gibson premises, hope to join forces to build apartments, shops, parks, play areas and other facilities there.

Hines said on Wednesday that it was too early to say how many apartments could be built on the properties, but said the final figure could be between 1,200 and 1,400 new dwellings. The developer is likely to build some of the homes to rent and others for sale.

“We will submit planning later in the year and, barring delays, we could start building by early next year. We could see first new homes available to rent and buy as early as 2022,” Hines said.

The company has invited locals to two open days at Player Wills on Thursday and Friday to discuss plans for the three combined sites.

Hines also held pre-planning talks with the council to ensure its proposals are in line with the county development plan and zoning proposals for the local area. This calls for new homes along with some shops, recreation and other services. The developer said its plan was “fully aligned” with those requirements.

The company and the council are considering a joint approach to developing all three sites. That is likely to cover new homes, the utilities they need, roads, the parks and play areas and other services.

The Player Wills and Bailey Gibson sites have lain undeveloped for more than a decade. During the last boom, Ciaran Larkin’s Bee Bee Developments bought the properties and got permission to build more than 750 apartments there.

Nama took over loans secured on the sites that were said to be between €90 million and €100 million. Hines acquired these from the agency’s receivers, Stephen Tennant and Paul McCann of Grant Thornton, early this year. Mr Larkin has no remaining interest in the sites.

Locals believe that the land should be used for houses. Following a rash of student accommodation building in the area in recent years, fears grew that the two unused industrial premises could end up being used for the same purpose.

The sites are among the largest available for redevelopment in central Dublin, one of the areas hit hardest by the Republic’s ongoing housing crisis.