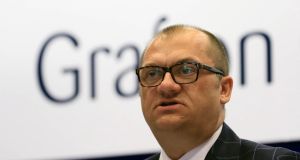 Heiton Buckley owner Grafton Group saw “softer than anticipated” market conditions in the UK in the first half of this year with revenue across the group increasing by just 2.4 per cent.

In the six months to June 30th, group revenue increased to £1.48 billion (€1.64 billion). The company noted that trading in May and June was measured against a strong performance the previous year.

The merchanting arm of the business, which includes Chadwicks, saw growth of 6.7 per cent in the Republic, a higher rate than in any other territories.

UK merchanting growth was 1.4 per cent, the Netherlands saw 5.4 per cent revenue growth while Belgium growth was just 0.3 per cent. The UK business, the company said, was weighed down by weak demand in the residential repair, maintenance and house building markets.

Aside from its merchanting businesses, Grafton also controls Woodie’s DIY in the Republic. Across its entire portfolio, the company trades from 725 branches including Selco and Buildbase in the UK. In the first half of the year its retail arm grew 2.2 per cent.

“We expect a continuation of the positive trading conditions in our markets in Ireland and the Netherlands. Activity over the summer in the UK will be an important determinant of momentum entering the significant trading months of September through to November.”

1 Admission of mistake in Oxford vaccine dose raises doubts over reliability
2 Move to EU or face disruption, City of London is warned
3 Cliff Taylor: Deal or no deal we are now heading for a hard Brexit
4 Last orders for Rí-Rá and Globe as Central Hotel gets green light to expand
5 Karlin Lillington: How I managed to cut my mobile phone bill by at least half
6 An Post parcel volumes to hit weekly record of 3.3m
7 Fiona Reddan: Who’s afraid of Revolut? Not AIB and BOI it seems
8 Lahinch Golf Club runs out of its own cash after €3m Covid-19 hit
9 German watchdog reports EY to prosecutors over Wirecard audit
10 Central Bank rules out changes to mortgage rules during pandemic
Real news has value SUBSCRIBE