Contractor worked on redevelopment of high-profile hotels including Adare Manor 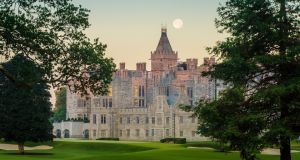 John Paul Construction was involved in the redevelopment of Adare Manor in 2018. Photograph: Murray Consultants

The John Paul Group saw profits rise almost 25 per cent during a year it completed high-profile projects including the redevelopment of Adare Manor and the Miesian Plaza in Dublin.

Turnover dipped almost 14 per cent to €301 million in 2018, however this was attributed to timing on new projects.

“The underlying fundamentals of the business remain very strong and we envisage significant growth in 2019 fuelled by the strength of activity in the greater Dublin area and increased activity in the regions including the West, with our new office base in Galway,” the company’s managing director, Eamon Booth said.

The John Paul Group is primarily involved in construction projects in Ireland and Britain, while it also has operations in Saudi Arabia and Bahrain through an associated company – Absal John Paul Contracting. It also holds investment property from which it earned €1.04 million in rent during the year.

John Paul employed 337 employees during the period, up 11 on the previous year, and paid out €28.5 million in remuneration. Those employees worked on hotel projects in Dublin including the redevelopment of the Trinity City Hotel and the Morgan Hotel, as well as commercial projects on the Pearse Lyons Distillery and the Seamark Building.

The company, which is 70 years in business, closed the year out with €31.5 million in the bank and on hand, up more than €6 million on the previous year.

Looking ahead, the directors noted the company has a “strong order book in place”, adding that they’re “confident that the people and systems we have in place will continue to allow us to serve the needs of our clients and to deliver projects of the highest quality”.

Arkle eyes results from Limerick zinc discovery ‘within weeks’ 07:24
Three Ireland switches on 5G network around the country 07:00
New car prices could rise by up to €10,000 if taxes increase in budget 06:51
Coronavirus threatens Europe’s pension industry 06:49
Gold prices edge up as dollar slips 06:34

1 Pilita Clark: The looming legal minefield of working from home
2 State should use Covid-19 impact on construction costs to build new homes
3 Three Ireland switches on 5G network around the country
4 New car prices could rise by up to €10,000 if taxes increase in budget
5 Motor tax hikes, D’arcy quits politics for IAIM, and Sprout’s takeaway pivot
6 Former junior finance minister to head funds sector lobby group
7 Coronavirus threatens Europe’s pension industry
8 More financial firms setting up or expanding in Ireland despite Covid-19
9 Me & My Money: ‘Money can’t buy you happiness but it can make life a lot easier’
10 Sprout pivots in pandemic towards takeaway and supplying food retailers
Real news has value SUBSCRIBE