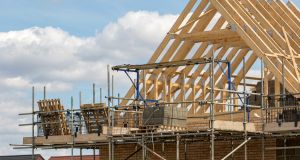 Persimmon said it had delivered 7,584 homes in the first six months of this year Photograph: iStock

The FTSE 100 company, which builds homes in more than 350 locations in the UK, said on Thursday that revenue fell 4.5 per cent to £1.75 billion for the six months ending June 30th.

Persimmon has faced criticism over the quality and fire safety of its homes, prompting the builder to launch a review of its business practices and bring the timing of sales closer to the date of home completion.

That decision was beginning to deliver anticipated results, the company said.

The builder’s focus on cheaper family homes helped it increase sales in 2018 even as the housing market, sluggish since the 2016 Brexit referendum, was weighed down by price declines in London and higher purchase taxes on pricier homes.

Persimmon said it had delivered 7,584 homes in the first six months of this year compared with 8,072 during the same period of last year.0 – Reuters