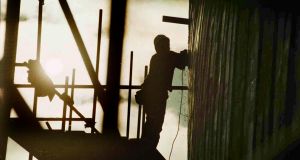 AIB said the costs of developing medium- to high-density apartments were “still too high”.

The presence of institutional buyers in the residential property market is the primary reason why large-scale standalone apartment blocks are being built, according to a report by AIB.

The report, Private Rental Sector and the Irish Rental Market, which examines the construction industry in the rental sector, is authored by AIB head of property research Pat O’Sullivan and property economist Rory McGuckin.

A key finding of the report is that the viability of apartment construction “remains challenging” in many parts of Dublin and this “continues to constrain the supply of new residential units in the capital”.

The AIB report says that, currently, the construction of large-scale apartment schemes outside of Dublin is not, for the most part, viable.

The report also suggests that the presence of institutional buyers in the residential market is the primary reason why large-scale standalone apartment blocks are being built.

“Without the presence of institutional buyers of apartment blocks in the private rental sector, the viability issue would be even more pronounced and the supply of new apartments would be even lower,” it says.

Given the growth in rents, rental affordability has become a challenge in certain areas and cohorts. Rental payment as a percentage of tenants’ household disposable incomes is highest in Dublin, the surrounding mideast region, and Cork city.

The report cites the Central Statistics Office, and notes that average rent accounted for 29 per cent of tenants’ household disposable income in 2016, just below the 30 per cent benchmark beyond which affordability becomes increasingly challenging.

In fact, the rent burden is 35 per cent or higher in many locations in Dublin and has exceeded 40 per cent of disposable income of tenants in a small number of locations.

It says one of the key drivers of the increased demand for rental accommodation is the “large numbers of non-Irish national workers in the labour force, who inherently have a preference to rent”.

AIB head of property finance Donall O’Shea said there were signs of increased housing supply in Dublin. “Ultimately, it is increased supply that will provide a sustainable and long-term solution to high rents in Dublin,” he said.

“There are tentative signs of an increased supply of new apartments in the capital, but progress remains slow and the actual number of apartments being constructed still falls well short of what is required.”

Mr O’Sullivan said the costs of developing medium- to high-density apartments are “still too high”.

“Rents for prime private rental sector properties in the very best locations are affordable by higher-income cohorts, but it does indicate that the high levels of rents outside the prime locations are probably not sustainable,” he said.

“Further compounding the problems of supply and affordability is the fact that the viability of large-scale apartment construction remains challenging in many parts of Dublin and generally not viable outside of Dublin.

“Essentially, the costs of developing medium- to high-density apartments are still too high, which in turn limits their viability to a small number of locations and to a limited pool of purchasers.

“That is, viability is limited to certain parts of Dublin and for the most part only because of the presence of institutional purchasers.”