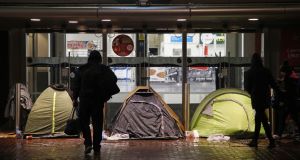 The Dublin Simon Community has launched a fund targeted at wealthy business people who will be asked to buy homes in the capital that would be leased to the charity for free for up to 15 years.

Sam McGuinness, chief executive of Dublin Simon, told The Irish Times that the homeless charity hopes to secure enough funding to buy 50 units in the greater Dublin area over the next two years. The properties would be expected to cost at least €250,000 each, which would require €12 million-plus from benefactors.

Called the Social Impact Fund, the aim is to provide quality and affordable housing to people who are working their way out of difficulties.

The benefactor would provide funding for Dublin Simon to purchase suitable housing units, typically one- and two-bedroom properties. They would then lease them to the charity at no charge for 15 years, with a break option after 10 years.

Local authorities would pay rent to Dublin Simon, which would use this income to maintain the units and to source additional housing stock.

Dublin Simon would be responsible for choosing suitable tenants, collecting rents, repairing and maintaining the properties, and returning them to the benefactors in good condition at the end of the lease period.

Irish stockbroker Davy is helping the charity promote the fund to high net-worth individuals, while estate agents and solicitors have offered to work with Dublin Simon for free on completing the property transactions.

The scheme was the initiative of successful food entrepreneur and Housing Agency chairman Michael Carey, and Neil O’Leary, a leading Irish corporate financier. “We developed the idea and advised Dublin Simon on how to structure it,” Mr Carey said, adding that he is doing this in a private capacity separate to his role with the Housing Agency.

Mr McGuinness said the fund has already received eight adjoining, two-bedroom terraced homes near Francis Street in Dublin 8 from an anonymous benefactor. These have been provided rent-free for a 10-year period.

He said the units had provided “stability” for 16 people. “Without this service, many of these people would have ended up back in emergency accommodation or sleeping rough,” he said.

Established 50 years ago, Dublin Simon provides services to more than 6,200 adults and children impacted by homelessness.

7 Brexit red tape: ‘If nothing changes, Ireland will be closed’