Electrical contractors not obliged to give to builder pension plan 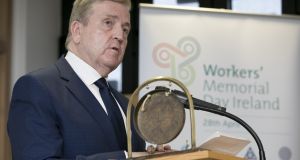 Electrical contractors cannot be forced to contribute to the builders’ pension scheme following the latest round of a court challenge to a Government order setting pay for their industry.

Minister of State for Employment Pat Breen recently issued a sectoral employment order setting the rates that electrical contractors should pay employees and requiring that they contribute to the Construction Workers’ Pension Scheme.

However, following a High Court ruling, neither electrical contractors nor their workers are required to contribute to the pension scheme. Mr Justice Charles Meenan put a stay on the section relating to the pension in a hearing dealing with a challenge to the Minister’s order brought by industry body National Electrical Contractors Ireland (NECI).

The judge originally stayed the pension requirement only for the 100-plus companies the NECI represents. But following representations from the State he extended it to the entire industry at a hearing last week, pending the outcome of the challenge to Mr Breen’s order.

Businesses face prosecution if they fail to comply with the terms of a sectoral employment order . But the judge’s ruling means that this will not apply to electrical contractors which do not contribute to the builders’ pension scheme.

As the Labour Court was satisfied that these bodies were “substantially representative” of the industry, according to the Industrial Relations (Amendment) Act, 2015, it recommended that the Minister make the sectoral employment order setting pay rates and other conditions for electrical contractors.

While the court stayed the pension provision, NECI members must still increase electricians’ pay from this week to €23.49 and €24.34 an hour, depending on service, from about €18 to €21 an hour.

What do the contractors say?

Employers face prosecution if they fail to comply with this. But the NECI, which represents smaller contractors based outside Dublin, says that many of its members cannot afford to pay these rates and could go out of business as a result.

The organisation maintains that the pay rates set out in the employment order are similar to those paid to electricians by large Dublin contractors, many of which provide services to multinational companies. About 40 of these businesses employ 4,000 electricians.

The NECI is challenging the order on the grounds that the Labour Court and Minister failed to properly follow the procedures set out in the 2015 legislation.

The organisation says that the Industrial Relations (Amendment) Act 2015 is unconstitutional, as it allows individuals and bodies other than the Oireachtas to make laws.

At the original hearing last month, Helen Callanan SC with David O’Brien and solicitor Harry Carpendale, for the NECI, argued that the order would have allowed the Construction Workers’ Pension Scheme, a private body, to set minimum contributions for electrical contractors and their workers.