Under a third of businesses operating at full capacity, survey of industry players finds 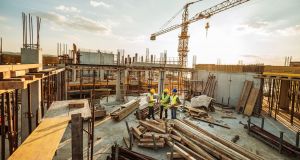 The industry is reporting alarming increases in redundancies and projected redundancies since our survey was last conducted in February,” said John Armstrong, managing director of the Construction Employers Federation.

Northern Ireland construction companies expect the sector to fall into recession with more than two-thirds of businesses not operating at their full capacity, a survey from the Construction Employers Federation has found.

Just 35 per cent of respondents, which includes Northern Ireland construction companies collectively responsible for just under £1 billion worth in turnover, said they were at full capacity, down from 75 per cent when the survey was last conducted in February.

More than two-and-a-half years since the Stormont executive collapsed, the construction industry has seen a slowdown in growth, the survey results suggest. Some 60 per cent of respondents see the market worsening in the coming year while 35 per cent believe expecting a fall in the number of staff they employ.

“The industry is reporting alarming increases in redundancies and projected redundancies since our survey was last conducted in February,” said John Armstrong, managing director of the Construction Employers Federation.

“Added to this, there is a systemic sustainability risk which is making more and more firms once again look with concern to their future.”

Mr Armstrong made the point that while the restoration of the Northern Ireland executive can’t solve the crisis alone, it is crucial to provide some certainty to the market. He noted the underfunding of utility NI Water, which, he suggests, has let to a “significant slowdown in the number of new homes being started and completed” because of the extent of required wastewater treatment works in Northern Ireland. The survey found that, as a result of the Stormont impasse, 60 per cent of companies have put off growth plans.

Meanwhile, almost 30 per cent of companies in the sector have let staff go, with 48 per cent expecting redundancies in the next three months. “For as long as their governance and financial model remains as it is, we will continue to face into a funding black hole which will make practically all of our collective infrastructure goals unachievable,” Mr Armstrong said.