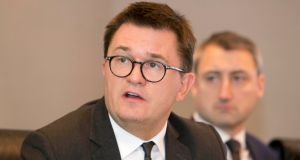 Glenveagh Properties chief executive Justin Bickle is to resign from the homebuilder with immediate effect.

Glenveagh Properties chief executive Justin Bickle is to resign from the homebuilder with immediate effect as he is returning to live in the UK, the company announced on Friday.

Mr Bickle informed the board that he is also stepping down as director effective immediately. Mr Bickle has spent much of the past decade working or living in Dublin.

He will be succeeded as chief executive from Friday by Stephen Garvey, who is currently chief operating officer and co-founder of the business.

The listed homebuilder made the announcement as it published its interim report for the six months ended June 30th, which showed it cut its operating losses by almost two thirds.

Both Mr Bickle and Mr Garvey said they would work closely with the board and the management team over the coming months to ensure a smooth transition.

The company also announced the appointment of Pat McCann and Cara Ryan as non- executive directors.

Ms Ryan has experience as a non-executive director, and has worked in the real estate and finance sectors.

“After almost a decade engaged in the Irish property market, first as a private equity investor and then as a CEO of a PLC, I am looking forward to returning full time to the UK and to pursuing my interests in private investing, education and the arts,” said Mr Bickle.

“It has been a pleasure to lead Glenveagh from its first days as a private company in August 2017, through our successful IPO, and during its first two years, as CEO.

“Together, Stephen, John and I have built the company into a leading Irish homebuilder and one with strong foundations.

“During the past two years we have raised and deployed over €700 million of institutional capital to produce an attractive development land portfolio for building houses and apartments.

Mr Bickle said the time was right for him to move on. “Today we are an ambitious listed company supplying volume housing to our customers in Ireland in locations they wish to live, and at prices they can afford,” he said.

“Glenveagh’s product is attractive to owner-occupiers as well as renters and institutional investors.

“This is the strategy we set out at IPO and have consistently followed since that time. As our results reflect, we are on course to meet our company targets for the second year in succession.

“Now that the company is executing so effectively on its business plan and strategy, the timing is right for Stephen to lead the business as CEO going forward and for me to return home.

Mr Garvey said Glenveagh was in a strong position as he takes the helm. “I would like to pay tribute to Justin whose vision, hard work and expertise has contributed greatly to getting our company to where it is today,” he said.

“Glenveagh is in a great position, with a clear strategy and can continue to capitalise on the opportunities in front of it.”

Glenveagh Properties chairman John Mulcahy said Mr Bickle had made an “invaluable contribution” to the company.

“He has been a driving force in the company, ensuring that we have grown the business strongly and it is well placed for continued success,” he said.

“I am delighted that we will still benefit from his expertise, knowledge and wisdom during the transition period and as a significant shareholder.

“Stephen will be an excellent CEO given his sector experience, operational expertise and deep understanding of our business. We are fortunate to have someone of his calibre ready to lead the business forward in the coming years.”

NTMA pulls Davy as Government bond dealer before auction 16:14
‘Global cybersecurity crisis’ builds from attack on Microsoft email software 15:22
Davy Q&A: Who was involved, what happened and what is the likely fallout? 14:05
Return of BBC Three shows that linear TV isn’t quite dead yet 14:00
RTÉ confirm presenter Eoghan McDermott will not return to radio show 13:52