Glenveagh chairman shells out €123,000 on shares 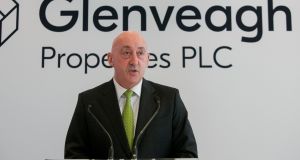 Glenveagh Properties chairman John Mulcahy paid €0.615 per share for 200,000 shares in a transaction which completed on Thursday. Photograph: Gareth Chaney/Collins

The chairman of Glenveagh Properties bought €123,000 worth of shares in the company, a sign of confidence in the aftermath of its chief executive announcing his departure last week.

John Mulcahy, who is also an executive director at the listed housebuilder, paid €0.615 per share for 200,000 shares in a transaction which completed on Thursday. The company announced the news to the stock exchange on Friday morning.

While Glenveagh didn’t set out the extent of Mr Mulcahy’s ownership of the company, according to Bloomberg records he previously held 2.4 million shares, or about 0.28 per cent of the company.

Mr Mulcahy’s share purchase came just above Glenveagh’s record low, hit on August 23rd when shares were trading for €0.598 apiece. Shares in the company have previously traded as high as €1.233.

Last week, Glenveagh said it was selling from 13 sites with 800 properties sold, signed or reserved so far. The company has been actively building on 17 sites.