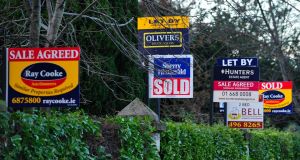 The property price survey showed that while 38 per cent of surveyors expect price falls in the coming 12 months, a third still expect prices to rise in the capital. Photograph: Aidan Crawley/Bloomberg

Almost 40 per cent of chartered surveyors expect Dublin house prices to decline by the middle of next year on the back of improved supply, a Central Bank of Ireland survey has found.

The property price survey, written with the Society of Chartered Surveyors Ireland (SCSI), showed that while 38 per cent of surveyors expect price falls in the coming 12 months, a third still expect prices to rise in the capital.

Looking at the national picture, 46 per cent of respondents said they expected house prices to rise, down from 78 per cent in the 2018, while the remainder expected prices to stay steady or fall.

John O’Sullivan, a director with Lisney Estates, pointed out that there is more nuance to price rises and dips than often reported. He said that properties requiring significant renovation, for example, have become “trickier to sell” because of the increase in construction costs seen over the past few years and the lack of availability of builders.

Still, he noted that there’s been a “significant increase in the supply of new units”. “The last boom was credit driven. The current boom has been driven by a lack of supply so, the new units coming on line have had the effect of dampening the growth,” he noted.

According to data from the Central Statistics Office, property price growth cooled to a six-year low of 2 per cent in the 12 months to June. That compares with 12 per cent a year ago. That slowdown followed a 25 per cent increase in new dwelling completions last year.

In any event, the Central Bank’s data shows that the median expectation is that in three years’ time, national house prices will be 5 per cent higher than current levels with Dublin’s rise expected to be 3 per cent. Nationally, the State’s economic performance and the availability of bank credit were cited as the main influences on property price developments.

The issue, as Mr O’Sullivan sees it, is that while supply has begun to meet demand, viability of construction may soon come into question given the rising cost of construction and a dampening of prices. Such a development could see developers looking toward the private rented sector rather than new residential home sales, he suggested.

“There’s an obvious shift toward the rental sector so I think, in the long term, property will increase in value in line with inflation but we do have an issue in this country,” Mr O’Sullivan added.

Elsewhere, the Central Bank’s report found respondents suggesting a contraction of sales activity across all regions in the second quarter of this year. “Sales enquiries and completions were reported to be particularly sluggish.” The time it takes to complete a sale on a property has increased, Mr O’Sullivan said, with the legal process particularly slow.

The slowdown in sales corresponds with fewer buy-to-let properties servicing the rental market, something 48 per cent of respondents put down to the current rental market legislation. Low rental returns were also listed as an important factor.

The Central Bank/SCSI report is a quarterly snapshot of respondents expectations at a particular point in time, “and so can provide only limited information about the possible future movements of house prices”, the report notes.