Engineer is hiring 200 new staff, half of those in the Republic, plus 100 graduates 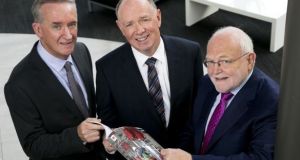 PM Group’s Larry Westman, Dave Murphy and Dan Flinter. The company is ‘very focused on the USA, we want to build up our scale there,’ said Mr Westman

Engineer and builder PM Group is eyeing further purchases of businesses in the US and Europe to follow two deals done last year.

PM chief executive Dave Murphy confirmed its interest in the acquisitions as the group reported that operating profit surged 71 per cent last year to €15.6 million from €9.1 million in 2017.

The Irish group spent €6 million buying two businesses last year, PM Projen in the UK and Magnet Group in Belgium. Mr Murphy said it was eyeing several potential targets but added that it was unlikely to complete any such transactions in 2019.

“Hopefully next year we will certainly get one or two deals done,” he added, saying that PM was looking at companies in the US and Europe.

Chief financial officer Larry Westman noted that PM was “very focused on the USA, we want to build up our scale there, the other area would be western Europe”.

PM Group manages construction and engineering projects for the pharmaceutical, food, technology and manufacturing industries. The company has operations here, in Britain, Europe, the US and Asia.

Last year’s deals expanded the group’s range into energy and utilities. While it serves all these industries in the Republic, one of its best-known projects was managing the rebuilding of Lansdowne Road stadium.

PM employs 2,600 people, 900 of whom own shares in the business. It is hiring 200 new staff, half of them in the Republic, and will take on 100 graduates, which it does every year.

Mr Murphy noted that it was always seeking process, mechanical, civil and structural engineers, and architects.

He pointed out that there was strong competition for people with the skills that PM was seeking. “That’s not just in Ireland, it’s in all our locations,” Mr Murphy stressed.

PM attributed the surge in sales to an increase in “pass through” revenue and costs incurred in carrying out procurement and contract activities for clients, which the company must include in its accounts. Net assets rose almost 20 per cent to €62 million.

“The sustained activity levels of our clients in the sectors where we specialise is what is driving this strong performance,” said Mr Murphy.

“We have made significant progress in China, having built a presence there over the past 10 years. We are involved in projects across our specialist sectors along the eastern seaboard as well as inland China. Our board is visiting China next week to see first-hand a number of the projects we have managed as well as the pipeline of new business.”

PM Group said Brexit had caused a “notable slowdown” in capital investment in the UK, but its existing business there improved performance year-on-year.

There were also strong levels of activity in the Netherlands, Belgium, Poland and Switzerland.

2 Who are Ireland’s 17 billionaires?

3 ‘Unlike other places in the US, you can actually afford to live here’