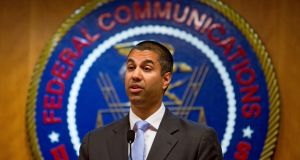 The head of the US Federal Communications Commission unveiled plans on Tuesday to scrap landmark 2015 rules intended to ensure a free and open internet, moving to give broadband service providers sweeping power over what content consumers can access.

Mr Pai said the action would remove heavy-handed internet regulations. Critics said it would let internet service providers give preferential treatment to some sites and apps and allow them to favour their own digital content.

The FCC action was a clear victory for big internet service providers such as AT&T, Comcast and Verizon, which favoured a repeal.

With three Republican and two Democratic commissioners, the FCC is all but certain to approve the repeal. Mr Trump, a Republican, expressed his opposition to net neutrality in 2014 before the regulations were even implemented, calling it a “power grab” by Obama.

Mr Pai said his proposal would prevent state and local governments from creating their own net neutrality rules because internet service is “inherently an interstate service.” The preemption is most likely to handcuff Democratic-governed states and localities that could have considered their own plans to protect consumers’ equal access to internet content.

“The FCC will no longer be in the business of micromanaging business models and preemptively prohibiting services and applications and products that could be pro-competitive,” Mr Pai said in an interview, adding that the Obama administration had sought to pick winners and losers.

“We should simply set rules of the road that let companies of all kinds in every sector compete and let consumers decide who wins and loses,” Pai added.

FCC Commissioner Jessica Rosenworcel, a Democrat, said Mr Pai’s proposal “hands broadband providers the power to decide what voices to amplify, which sites we can visit, what connections we can make, and what communities we create. It throttles access, stalls opportunity and censors content.”

Tom Wheeler, who headed the FCC under Mr Obama and advocated for the net neutrality rules, called the planned repeal “a shameful sham and sellout. Even for this FCC and its leadership, this proposal raises hypocrisy to new heights.”

AT&T, Comcast and Verizon have said that repealing the rules could lead to billions of dollars in additional broadband investment and eliminate the possibility that a future presidential administration could regulate internet pricing.

Comcast said no matter what the FCC decided it would “not block, throttle or discriminate against lawful content.” AT&T said all major companies have publicly agreed to honour net neutrality and a company “that is so foolish as to seek to engage in gatekeeping will be quickly and decisively called out.”

Verizon said it believed the FCC “will reinstate a framework that protects consumers’ access to the open internet, without forcing them to bear the heavy costs from unnecessary regulation.”

The planned repeal represents the latest example of a legacy achievement of Mr Obama being erased since Mr Trump took office in January. Mr Trump has abandoned international trade deals, the landmark Paris climate accord and environmental protections, taken aim at the Iran nuclear accord and closer relations with Cuba, and sought repeal Mr Obama’s signature healthcare law.

The Internet Association, representing major technology firms including Alphabet and Facebook, said Mr Pai’s proposal “represents the end of net neutrality as we know it and defies the will of millions of Americans.”

Mr Pai’s proposal would require internet service providers to disclose whether they allow blocking or slowing down of consumer web access or permit so-called internet fast lanes to facilitate a practice called paid prioritisation of charging for certain content. Such disclosure will make it easier for another agency, the Federal Trade Commission, to act against internet service providers that fail to disclose such conduct to consumers, Mr Pai said.

A US appeals court last year upheld the legality of the net neutrality regulations, which were challenged in a lawsuit led by telecommunications industry trade association US Telecom.

The FCC’s repeal is certain to draw a legal challenge from advocates of net neutrality.

New York Attorney General Eric Schneiderman, a Democrat, said he has been investigating for six months who provided significant numbers of fake public comments to the FCC in its review of net neutrality rules, corrupting the process.

Nancy Pelosi, the top US House of Representatives Democrat, said the FCC move would hurt consumers and chill competition, saying the agency “has launched an all-out assault on the entrepreneurship, innovation and competition at the heart of the internet.”

Mr Pai said he had not shared his plans on the rollback with the White House in advance or been directed to undo net neutrality by White House officials.

Mr Pai’s proposal would give the FCC significantly less authority to oversee the web. The FCC granted initial approval to Mr Pai’s plan in May, but had left open many key questions including whether to retain any legal requirements limiting internet providers’ conduct.