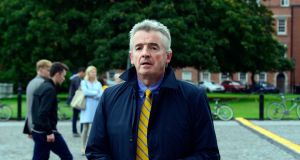 Warm and moving tributes were paid at a memorial service in Dublin on Friday for James Osborne, the Ryanair director and former managing partner of A&L Goodbody, who died tragically in Donegal last week aged 68.

Mr Osborne was cremated this week at a private ceremony. Friday’s memorial was held at Trinity College, where attendees filled the Examination Hall, and an overflow marquee erected in the front square.

Mr Osborne was a respected member of the legal profession, and also held a wide variety of senior corporate roles. His family were joined at the service by many of his friends, including senior business and political figures, as well as others from the entertainment and sporting sectors.

There were a dozen speakers, beginning with Mr Osborne’s son, Patch, who delivered a moving tribute to his father. Patch Osborne said he chose not to follow in his father’s career footsteps.

“But by wearing his shoes here today, we will walk together,” he said, addressing his late father and tapping his feet.

Mr Osborne’s brother, Beaumont hospital consultant Henry Osborne, drew laughter when he recalled how his brother, a keen sailor, accidentally sunk a yacht as a 16 year old while trying to impress the 19-year-old daughter of a British navy captain.

Mr Osborne’s daughter, Lucy, read a passage from the Wind in the Willows that her father read to his only granddaughter – Lucy’s daughter, Maya – this summer. His young daughter Pia also spoke confidently about her father.

Ryanair’s Mr O’Leary delivered a funny, but also searingly emotional tribute to his friend, who he joked had “too much personality” to be a solicitor.

Mr Osborne is survived by his wife, Heather, their children Lucy and Patch, his granddaughter Maya, his partner, Patricia Devine, and their daughter, Pia.