Increase due to strong growth in boradcasting and commercial businesses 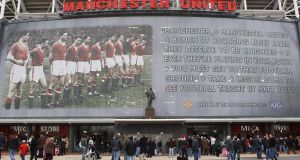 Revenue for the period at Manchester United came in at £141 million, compared with £120.2 million a year ago.

Manchester United posted a 17.3 per cent rise in first-quarter revenue helped by strong growth in both broadcasting and commercial businesses.

United, whose leading players include Paul Pogba and Henrikh Mkhitaryan, are currently top of their group in the lucrative Champions League competition and are second in the 20-team English Premier League.

The club’s adjusted earnings before interest, tax, depreciation and amortisation for the three months to September 30th rose to £36.6 million from 31.2 million pounds a year earlier, reflecting its participation in this season’s Champions League.

1 Moving in and out of lockdown is a recipe for economic disaster
2 General Motors deprived of rising star after CFO’s surprise move to Stripe
3 UK economy slumps into deepest recession on record after 20% drop in GDP
4 Government to publish broadband contract 10 months after controversial deal
5 Revised help-to-buy scheme opens for applications
6 Objectors stall production of enough timber for 5,000 houses
7 Tesla to split shares to make stock less expensive for individual investors
8 KBC Ireland chief feels heat from big tech in race for relevance
9 AIB concedes Covid mortgage policy was ‘regrettable’
10 ‘No demand... because there are no people’ at well-known Dublin pub
Real news has value SUBSCRIBE