Membership of Ireland-Asia business group increases by 70 per cent

Irish interest in doing business in region is growing, according to Asia Matters director 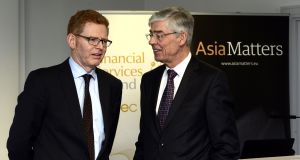 Gerry Cross of the Central Bank of Ireland with Alan Dukes at a roundtable discussion on Brexit earlier this year. Photograph: Cyril Byrne

Irish interest in doing business in Asia is growing, according to a leading organisation focused on developing links between the region and this country.

Membership of local think tank Asia Matters, which is chaired by former government minister Alan Dukes, has increased by 70 per cent over the past 18 months.

Executive director Martin Murray said that its focus on building business links and aiding organisations in developing an understanding of Asian markets has “struck a chord” with many companies.

According to Mr Murray, more than 11,500 people from 47 countries have taken part in Asia Matters events in Ireland, China, Hong Kong, Japan and Singapore, while they have drawn 400 speakers.

About 125,000 people have read its publications, while policymakers and the media have frequently consulted the organisation on various issues relating to Asia.

He noted that businesses see the value in using its expertise on and contacts with “the key economies of China, India, Indonesia, Hong Kong, Singapore and Japan”.

The group will host its first Global Asia Matters Summit in Dublin next November.

1 Irish company to test vaccines on volunteers deliberately infected with Covid-19
2 Should I switch bank now with Ulster Bank at risk of closing?
3 Air travel never going ‘back to way it was’
4 Bank of Ireland sees more than 1,400 staff apply for redundancy
5 Why working in an office beats living at work
6 Stripe wins more corporate customers, announces Salesforce deal
7 J&J launches first phase 3 trial of single-dose Covid-19 vaccine
8 Review: Bigger not always better for laptops
9 South Dublin land at €19m has scope for up to 500 homes
10 European stocks rise amid rebound for travel stocks
Real news has value SUBSCRIBE