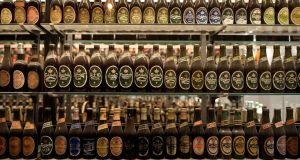 Beer museum in Carlsberg headquarters in Copenhagen. The company is aiming to cut as much as 2 billion kroner of costs by the end of this year. Photograph: Fabian Bimmer/Reuters

Earnings before interest, taxes and one-time items rose 20 per cent to 4.13 billion kroner (€555 million), the Copenhagen-based company said in a statement on Wednesday.

Analysts expected 3.82 billion kroner. The brewer maintained its full-year guidance of mid-single-digit organic growth in operating profit even after earnings on that basis rose 15 per cent in the first half.

“People are going to question why the guidance is unchanged,” said Ed Mundy, an analyst at Jefferies.

Carlsberg is aiming to cut as much as 2 billion kroner of costs by the end of this year to defend against an enlarged and more profitable rival following the combination of Anheuser-Busch InBev and SABMiller.

Earlier this month, AB InBev merged its Russia and Ukraine business with that of Turkey’s Anadolu Efes, heaping pressure on Carlsberg’s operations in Russia, where the Danish brewer controls more than a third of beer sales.

“The results show that we’re well on track to deliver on our key priorities for this year,” said chief executive Cees ’t Hart.

Sales rose 2 per cent on a basis that excludes currency and acquisition effects. Analysts predicted organic growth of 3.2 per cent. Carlsberg also reduced its forecast for gains from currency shifts to 50 million kroner from 300 million kroner. The company cut its debt by 14 per cent to 21.9 billion kroner.

The second half of the year will see Carlsberg reinvest a higher proportion of savings into its business in addition to increased costs related to its turnaround program, said chief financial officer Heine Dalsgaard on a call with analysts.

Poor weather in northern Europe in the first weeks of the third quarter may also weigh on results, he said, potentially dealing a setback to a turnaround in the brewer’s financial performance.

“Today’s results confirm the challenges that Carlsberg faces are ongoing,” Eddy Hargreaves, an analyst at Investec, said in a note.