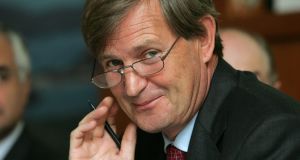 James Osborne, the Ryanair director and former managing partner of A&L Goodbody solicitors, has died. He was aged 68.

James Osborne, the Ryanair director and former managing partner of A&L Goodbody solicitors, has died. He was aged 68. He died in recent days in his native county of Donegal, where it is understood his body was found on Friday.

Mr Osborne was a highly respected figure in Irish corporate and legal circles. As well as being the senior independent director at Ryanair, Mr Osborne was also chairman of the bookseller Eason. He also sat on the boards of Australian-listed company James Hardie Industries and Oneview Healthcare.

Already well-known in business circles, Mr Osborne gained greater public prominence when he was, for nine months between 2011 and 2012, the chairman of Independent News and Media while that company was at the centre of a bitter battle for control between Denis O’Brien and Tony O’Reilly.

While he had a high-flying corporate career that also included spells as director of PJ Carroll and Golden Vale, Mr Osborne first made his name as a talented solicitor. He joined A&L, one of Dublin’s top corporate law firms, upon qualifying in the 1973, and was made managing partner when still aged in his early 30s. He led A&L for 12 years, and was latterly a consultant for the firm.

Mr Osborne was also very well known for his love of horse racing, and had a wide-circle of friends in the industry. He is survived by his family and partner.