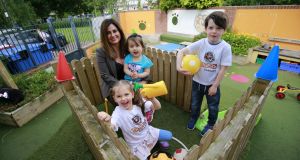 The three centres, in Belmayne, Blanchardstown and Leopardstown in Dublin, will add to the company’s 10 existing centres and bring to more than 1,100 the number of children under the company’s care. The purchase price was not disclosed.

Tigers previously acquired two centres from Bright Horizons, which currently operates in the US, Canada, Britain, Ireland, the Netherlands and India. The company is understood to be exiting Ireland.

Bright Horizons had four Irish operations at the end of last year. Its most recent financial results, for 2015, show a reduced loss of €243,549 on turnover €3.46 million.

The parent company operates more than 1,000 centres in various markets, including more than 300 in the UK, catering for about 115,000 children. Its European centres have average capacity of 80 children per location, the company said in its annual report.

Tigers Childcare has signed leases of up to 25 years on two of the three properties recently acquired, with the physical properties being bought by a property investor.

The company is funding the deal through internal reserves in addition to a small loan. Tigers Childcare made a pretax profit of €200,000 in 2016 on turnover of €1.9 million.

“This is the start of something bigger,” said Tigers managing director Karen Clince. Speaking to The Irish Times, she said the company had a five-year plan during which it hopes to expand into the UK. “We have two properties we’re looking at in the UK, one in London and one in Edinburgh, ” Ms Clince said.

The childcare entrepreneur started her business 14 years ago at the age of 21 when she was a resource teacher in Glasnevin, Co Dublin. The business began in a spare room in the school where she worked before expanding.

With this latest acquisition, the company has expanded its reach into south Dublin having previously only had a presence on the northside of the city.

While Tigers said it has waiting lists for all of its current services, Ms Clince said the services being acquired are not full.

As well as on-site preschool and after-school childcare services within eight school settings in the city, Tigers Childcare also provides full-day childcare services at purpose-built early-years centres in Swords in Dublin and Ashbourne in Meath.

Asked about the high cost of childcare, Ms Clince said cost reductions could be seen only following Government investment.

“The market has changed incredibly,” she said. “It’s very much degree-led, so wages are higher. We have a staff turnover of 3 per cent, so we pay that little bit more than our competitors.”

While Ms Clince agreed that there is money to be made in childcare, she said profitability lies in in growth and expansion.