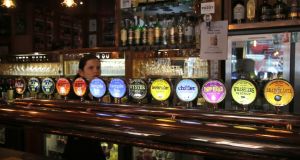 The Porterhouse pub and craft brewing group and the related Dingle Distillery are seeking to raise €4 million under a State investment incentive scheme to fund expansion at their respective premises in Dublin and Kerry.

Liam laHart, a director of the company, said it was seeking to raise €2 million to fund expansion of production to meet demand for its whiskey and gin, which won best gin in Ireland at the recent Irish Whiskey Awards.

The separately incorporated Porterhouse group, through one of its companies Coachbury Taverns, is also expected to launch an EIIS scheme in coming weeks. Mr laHart is also a director of this company.

The Porterhouse fundraising will target between €1.5 million and €2 million to “increase production as well as [for] the creation of a visitor centre in the new state of the art brewery” in Glasnevin, Dublin, according to a draft of the investment prospectus.

The EIIS brochure for Porterhouse says it plans a “completely immersive visitor and events centre on site which will be used to provide revenue for the company as well as increasing awareness of the brand”.

It also wants to increase production of draught and bottled beers to meet demand as the craft beer sector continues to resonate with younger drinkers.

The marketing materials for both fundraisings suggest the possibility of a 20 per cent return for investors after a four-year lock-in period, although this is not guaranteed, the directors stress.

The Porterhouse group comprises seven bars – five in greater Dublin and one each in New York and London – as well as five restaurants, Lillie Bordello nightclub, and the brewing business.

It was co-founded in Bray in the mid 1990s by Mr laHart and his cousin, the well-known publican and former barrister Oliver Hughes, who died suddenly in 2016. They founded Dingle Distillery in 2012.

“The new brewery will allow us to increase our production for both the export and domestic markets,” said Mr laHart, who added that the Glasnevin visitor centre would be differentiated from other brewers’ centres, “which are more like museums”.

Elliot Hughes, son of the late co-founder and an executive at the group, said it also has “advanced plans” to build a visitor centre at the Dingle operation. “We plan to double our production of spirits next year and expand aggressively in the North American market.”