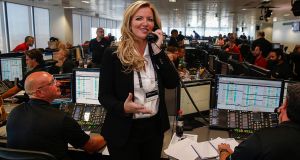 Michelle Mone, the founder of the Ultimo lingerie company, told a Dublin conference audience this afternoon that Margaret Heffernan of Dunnes Stores was one of the early supporters of her business.

Ms Mone was one of the speakers this afternoon at the Pendulum Summit in the Convention Centre Dublin, which is being staged by the former rugby international, Frankie Sheahan.

She said that when she was building up her company more than 15 years ago, she approached Ms Heffernan to stock her Ultimo bra line.

“She gave us a listing and it helped us build the business. I’ve always looked up to Margaret Heffernan since,” said Ms Mone, a working class Glaswegian who was made the Baroness of Mayfair in 2010 by the Queen of England.

The Ultimo bra was made famous by Julia Roberts in the film Erin Brockovich, and Ms Mone later became an international celebrity and business adviser. She has gone on to establish a slew of consumer brands since selling her control stake in Ultimo in 2015.

Richard Branson, the Virgin tycoon, is also due to speak at the Pendulum Summit on Wednesday afternoon.

The two-day event is billed by its promoters as one of the biggest business motivational conferences in the world, with more than 6,000 attendees.