Conor McGregor one of sport’s highest-paid, according to ‘Forbes’

Rory McIlroy comes in at No 26 on world list, which is dominated by soccer stars 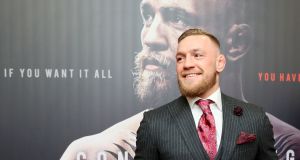 Conor McGregor comes in fourth place with a total of about €84.5 million. A year earlier he was ranked in joint 24th. Photograph: Paul Faith/AFP/Getty Images

Mixed martial arts fighter Conor McGregor has been named one of the highest-paid sports stars in the world following his fight against boxer Floyd Mayweather last year.

The UFC star may have taken a bit of a pummelling in the ring, but the fight was a nice earner for McGregor, who has jumped 20 places in Forbes’s annual list of the highest-paid athletes.

McGregor comes in fourth with winnings of $85 million (€72.5 million) and an additional $14 million in endorsements to give a total of $99 million. A year earlier he was ranked in joint 24th place overall with earnings of $61 million.

Top of the Forbes list is McGregor’s recent opponent. Mayweather, who recently suggested he was open to fighting the Irish man in a mixed martial arts fight in the UFC, had earnings of $275 million and a further $10 million in endorsements.

A fellow Irish man, golfer Rory McIlroy, is ranked 26th in the list, with earnings of $34 million, and a further $3.7 million in endorsements, for a total of about €32 million.

Soccer stars dominate the list, with Lionel Messi in second place overall with earnings of $111 million, followed closely by arch rival Cristiano Ronaldo on $108 million. Neymar, who became the most expensive footballer in transfer history when he joined Paris Saint Germain for €222 million in August 2017, is ranked in fifth place with earnings of €77 million.

The 100 top-earning athletes hail from 22 countries and compete in 11 sports with basketball players the most prevalent. Over the past 12 months, the athletes combined banked a cumulative $3.8 billion with 23 per cent of this derived from endorsements and appearances.

1 Google tells workers to return to country where they are employed
2 Recurring Covid restrictions will kill off many viable businesses
3 Sean Quinn stunned at rebranding of Quinn Industrial Holdings
4 Pension problems: Workers ‘leaving free money on the table’
5 Invest in more social housing to avoid Covid-related supply shock, says ESRI
6 CRH finance director Senan Murphy to step down
7 Will tracker mortgage be at risk if Ulster Bank closes?
8 Prof Matt Cooper: ‘On the edge . . . that’s where really great stuff happens’
9 Probate is changing: What does that mean for you?
10 Targeting Government and regulators core responsibility of Michael D’Arcy's role
Real news has value SUBSCRIBE