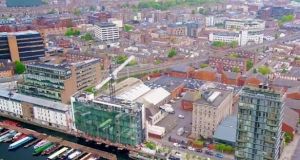 Trinity College Dublin ’s plan to develop a €1 billion technology campus in Dublin’s so-called Silicon Docks area has moved up a gear following the appointment of Savills Ireland to provide financial management and property advisory services for the project.

Savills will advise Trinity College Dublin on the initial stages of the project, This work will include preparation of the business case, market testing, formulating and design of the procurement strategy and, if appropriate, securing of a development partner to deliver on the project.

The Savills team will be led by Mary Birmingham, the project director and Ebba Mowat, programme manager, supported by Oliver Fursdon in Savills’ London office and his colleagues Alex McKinlay, Rory Brooke and Louis Sargent.

Commenting on the project, Ms Birmingham, a former head of asset management at Nama, said: “We are very excited to be part of this project – the first of its kind in Ireland. Savills has extensive experience in the development of innovation districts in cities around the world which we will utilise for the execution and delivery of this strategically important development for the country as a whole.”

Ms Mowat said: “There is no better location in Dublin for an innovation district. Over the past 20 years, the area has been transformed and is now home to some of the world’s most innovative companies, such as Google, Facebook and HubSpot – to name a few. The addition of the Grand Canal Innovation District further adds to the location’s reputation as a global hub for technology and innovation.”

Trinity East will house a major new research institute to be known as E3RI focused on bringing together multiple disciplines – engineering, computer science, natural sciences and material science – which will work at scale to tackle some of the most challenging research problems facing enterprise and society.

In addition, Trinity’s four national centres – the SFI centres (Amber, ConnecT and Adapt) and the EI/IDA Technology Centre Learnovate – will be housed at the new campus, allowing enhanced interaction, collaboration and industry engagement.

The campus will also provide significant space for industry co-location and for the development of new and innovative incubation space for early stage and scaling companies.