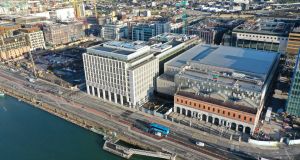 An aerial view of North Dock shows its location next to the 3 Arena in Dublin’s north docklands.

Having recently secured US biopharmaceutical company Gilead Sciences as a tenant for more than 30,000sq ft at North Dock Two, developer TIO has reached practical completion of the building and the wider North Dock scheme.

While it’s understood that heads of terms have been agreed on the letting of a further 15,000sq ft at North Dock Two, the remaining 62,000sq ft of space is being offered by joint agents JLL and Savills at a rent of between €52.50 and €55 per square foot.

The scheme should appeal to the public sector particularly, given its obligation since December 31st, 2018, to favour the occupation of buildings that comply with nZEB standards. North Dock is the first of a number of buildings under construction to achieve this benchmark.

TIO have been one of the most prolific developers in the Dublin docklands over recent years. They have previously developed and sold the Grant Thornton HQ on City Quay; 5 Hanover Quay, which they sold to German fund manager Union Investment for €190 million; and the adjoining Opus luxury apartments at 6 Hanover Quay.

The company recently completed the new 76 Sir John Rogerson’s Quay office building, which is attracting strong interest, and are within months of completing the new residential scheme to its rear, the Benson Building, which it sold to German fund Patrizia for €52.5 million last year .