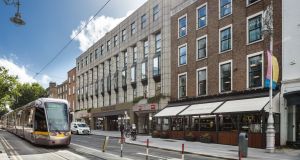 The German family-office investor, AM Alpha, is said to be in pole position to acquire Royal Hibernian Way on Dawson Street.

Having paid €50 million to secure ownership of Dublin’s Northside Shopping Centre in November of last year, the company is understood to be closing in now on the purchase of the office-led city centre scheme for about €75 million.

While AM Alpha has yet to enter into exclusive negotiations for the development it is understood to have fended off competing bids from several other parties including Derek McGrath’s Core Capital and US private equity giant Lone Star’s Irish affiliate, Hudson Advisors.

Should a deal proceed at around the €75 million mark, it would represent an approximate discount of 6 per cent on the €80 million price joint agents JLL and TWM had been guiding when they brought the scheme to the market on behalf of Aviva in September.

Royal Hibernian Way is located on what is arguably Dublin city centre’s most sought-after thoroughfare and is a mixed-use development extending to 92,888sq ft. The bulk of the scheme (72,000sq ft) comprises office accommodation while some 21,000sq ft is dedicated to retail and hospitality.

The majority of the office space (66,000sq ft) serves as the headquarter building for Davy Stockbrokers, while the remaining offices, located at 12 Duke Lane, have been left vacant intentionally by Aviva as planning permission has already been achieved to double the size of the building.

The overall annual passing rent is approximately € 2.78 million per annum. However, there is scope, according to the joint selling agents, to increase this by leasing the vacant retail units where there is active tenant demand or where they have been kept vacant to facilitate the redevelopment of 12 Duke Lane. There is also an imminent rent review on Davy’s office space.

Royal Hibernian Way is the largest stand-alone asset held by Aviva on behalf of life and pension policyholders in the Friends First Commercial Property Fund. The move to dispose of the property follows Aviva’s € 43.5 million sale to Iput earlier this year of its 29.2 per cent interest in Riverside One on Sir John Rogerson’s Quay and its half share in Unit D, Kilcarbery Distribution Park.

While Northside Shopping Centre represented AM Alpha’s first investment in Ireland’s retail property sector, the company has been active in the past in the Dublin office market.

In 2012, the Munich-headquartered investor paid € 35.5 million for Riverside II on Sir John Rogerson’s Quay in the Dublin docklands. The price paid represented a relative bargain when compared to the €60 million valuation attached to the property in 2006 when it was under the ownership of the Elliott, Kelly, Flynn and McCormack families.

AM Alpha secured a gross profit of € 14.5 million from Riverside II when it sold the building on 18 months later to Irish property fund Iput for about € 50million.