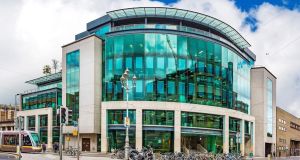 US-headquartered investment giant Pimco Global Advisors is to expand its operations in Ireland following the agreement of a deal for new offices in Dublin city centre.

Pimco, which has some $2 trillion of assets under management, is to establish its new Irish headquarters at the Harcourt Building on Harcourt Street. The company has agreed to sublease the third floor of the property, extending to a net internal area of 1,050sq m (11,300sq ft) for a term of eight years at a rent in the region of €57 per sq ft (€614 per sq m) and €4,000 for each of the basement car parking spaces. Pimco’s move to Harcourt Building will give it the capacity to grow its Dublin-based workforce to more than 100 people.

The agreement of the letting follows the agreement by US software technology company Nuance Communications in the first quarter of this year to sublease 1,350sq m (14,531sq ft) on the fourth and fifth floors of the Harcourt Building on similar lease terms. The deal was also negotiated by BNP Paribas Real Estate.

Designed by Niall D Brennan and Associates in 2003, the Harcourt Building is a striking six-storey Grade A office building extending to 5,202sq m (56,000sq ft). It occupies a prominent and high-profile position on Harcourt Street in Dublin’s central business district. The third floor comprises turnkey office accommodation which is fully fitted to a high specification including raised access floors with floor boxes wired for power and data cabling, suspended ceilings with efficient light fittings, air conditioning, boardroom/meeting rooms, as well as canteen and shower facilities.