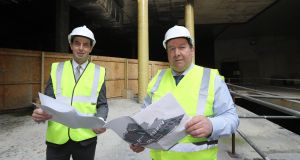 A €10 million plan to revive a boom-era shopping centre in Co Kildare will create up to 850 jobs, according to the developer behind the project.

The Ger Roche-led Roche Group has taken the first steps to redeveloping Naas Shopping Centre in the Co Kildare town after the National Asset Management Agency (Nama) recently sold the building to the business.

Roche Group intends to spend €10 million redeveloping the complex as a shopping and commercial centre, and will seek permission for the work from Kildare County Council early in 2021. The builder hopes the centre can open in 2022.

Construction is likely to require about 150 workers, while Roche Group calculates that the centre itself will employ about 700 people when it is up and running. Their wages could total €20 million a year.

The group is currently cleaning and sealing the structure in the centre of Naas. The building lay unused from 2008 after the financial crisis and property market collapse put paid to original developer Marshalsea’s plans for the centre.

Mr Roche said that his group’s plans would reverse the negative consequences of leaving the property unused over the past decade. Locals say the empty building is an eyesore.

“Plans for the development will be slightly changed from the original as we recognise that a range of new mixed uses are now more viable than the fully retail shopping centre as originally planned 15 years ago,” he added.

Mr Roche explained that the group’s plans involved reworking the original proposals and required the support of Kildare County Council.

“We are confident this will be finished on time over the next 30 months,” he said. Former Fianna Fáil TD Frank O’Rourke is the project manager. Real estate group Lisney will be letting agents.

Talks are under way with potential anchor tenants for what will be the ground-floor shopping complex. The upper floors are likely to hold a mix of other businesses.

Dunnes Stores was named as the original anchor tenant when the project first began more than a decade ago.

Nama appointed Duff & Phelps as receiver to the property in 2017. It put the building on the market with a guide price of €4.5 million, a fraction of the original construction cost.

Mr Roche owns and runs the Vista Primary Care centre in Naas. Originally from Foxford, Co Mayo, he had a successful career in the US, where he worked in Alaska, among other places, before returning to Ireland in the 1980s.