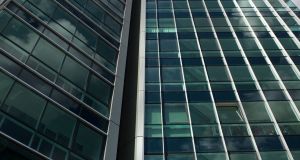 Kennedy Wilson has bought the Elysian Tower for €87.5 million from previous owner, another US fund, Blackstone.

The California-based landlord confirmed on Monday it has bought the Elysian Tower for €87.5 million from previous owner, another US fund, Blackstone.

Kennedy Wilson can only increase rents for existing tenants by 4 per cent when they renew their leases after one year.

However, the company can increase charges by more than this when it is renting out to new tenants.

One of the Elysian’s bigger apartments leased for €3,000 a-month several weeks ago.

Property websites were advertising two-bed apartments in Cork at more than €1,200 a-month on Monday.

Kennedy Wilson said tenants in blocks it owns in Dublin have reacted well to extra amenities such as on-site management, gyms, cinema and games rooms and meeting areas.

The US company is one of the Republic’s biggest landlords, its Dublin properties include Clancy Quay in Kilmainham, the Alliance on South Lotts Road, Sandford Lodge in Ranelagh and 1.5 million sq ft offices.

The Elysian is its first significant step outside the capital. Located close to Cork City Hall, the tower has 206 apartments and 67,600 sq ft of offices and shops.

According to Kennedy Wilson, 98 per cent of the apartments are let, while about two thirds of the commercial space is occupied.

Blackstone, another US investor, acquired the block as part of a settlement with the O’Flynn group, and put the property on the market late last year.

That company later paid the O’Flynn group a further €5 million to complete fitting out some apartments.

The construction company continued to manage the building although this is likely to end once it passes to Kennedy Wilson.

Ms Ricks said that the landlord believed there were opportunities to lease the vacant commercial space.

She noted that the Elysian had “virtually no residential projects in direct competition”.

1 Moving in and out of lockdown is a recipe for economic disaster
2 UK economy slumps into deepest recession on record after 20% drop in GDP
3 General Motors deprived of rising star after CFO’s surprise move to Stripe
4 Government to publish broadband contract 10 months after controversial deal
5 Tesla to split shares to make stock less expensive for individual investors
6 Objectors stall production of enough timber for 5,000 houses
7 Revised help-to-buy scheme opens for applications
8 ‘No demand... because there are no people’ at well-known Dublin pub
9 KBC Ireland chief feels heat from big tech in race for relevance
10 AIB concedes Covid mortgage policy was ‘regrettable’
Real news has value SUBSCRIBE