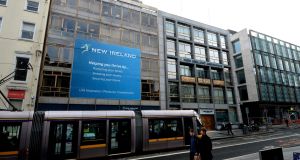 Four property developers have survived the first round of bidding for the headquarters of New Ireland Assurance on Dawson Street, in Dublin city centre, which is to be demolished and replaced by a considerably larger block divided into shopping and office facilities.

Chartered Land, the developer of the Dundrum Town Centre, is among the companies pitching for the five and six storey office blocks, along with Hibernia REIT, Meyer Bergman/BCP Asset Management and Navan developer Eamon Duignan.

Savills Ireland has been quoting in excess of €35 million for the headquarters buildings, which dates back to 1964 and 1971.

New Ireland is a wholly owned subsidiary of the Bank of Ireland.

By coincidence, the complex is three doors away from the Trailfinders block, separately owned by property developer Gerry Gannon, which is currently for sale at over €7.75 million.