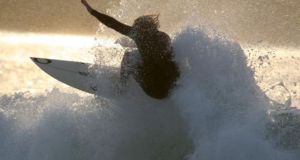 Ricky and Chris Martin, who own SkunkWorks Surf Company, launched their latest finance drive on Crowdcube hoping to raise £350,000.

Two surfing brothers from Portrush who set up Northern Ireland’s first surfboard company have caught a wave of new investment from a popular crowdfunding platform and raised more than £405,000 (€462,500) in just one week.

Ricky and Chris Martin, who own SkunkWorks Surf Company, launched their latest finance drive on Crowdcube hoping to raise £350,000 but after 200 investors jumped on board they easily met their initial target and are now aiming to hit £600,000.

They first decided back in 2013, after a lifetime of surfing and a growing frustration with the performance and life span of their boards, that they could do better and started working with both engineers and materials experts to create their own surfboards.

They raised an initial £50,000 to float their idea and have so far invested £500,000 on research and development to produce their Skunkworks boards using patent-pending, heat-bonding technology.

According to the Martin brothers this completely eliminates the use of adhesives in the production of their boards.

“Glue hates everything about surfing, from sun to sand and salt water. The bonds on our boards are one of the strongest elements – not the weakest,” they said.

Two years ago the brothers moved production of their surfboards from a garage to a 16,000sq ft factory on the north coast and currently now employ 12 people full time.

Last year they sold more than 600 boards to surf schools in Norway, France, Spain, Morocco, Portugal, the UK and Ireland and they now have ambitious plans for the future.

The Martin brothers would like to grow their production capacity to 4,060 surfboards this year but they need to get the finance in place to make that happen.

Ricky said: “The response on day one of this campaign was immense. Over 100 investors helped us reach our initial £350,000 target. But the investment has kept coming. The interest in what we are doing globally is phenomenal. It’s clear people want to be on this journey with us.”