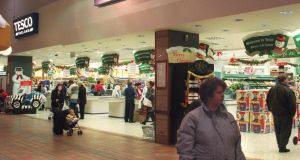 Davy’s Irish Property Fund, where holdings include a controlling stake in the Nutgrove Shopping Centre in Rathfarnham in south Dublin, is understood to be seeking fresh investment as it plans to double in size over the next three years from its current value of €284 million.

The fund, which Davy inherited when it took over Prescient Asset Management Holdings, formerly AIB Investment Managers, in late 2013, has delivered an annual total return of 19.3 per cent over the past five years.

This has included strong capital growth, topped up by income, according to its latest quarterly update, seen by The Irish Times.

More than half of the Dublin-focused portfolio’s assets were in office real estate, with 43 per cent in retail and 6 per cent in industrial assets at the end of March.

Other top holdings include an office building on Lower Hatch Street in Dublin 2 currently let out to US financial services group MetLife, and Medtronic, the world’s largest stand-alone maker of medical devices.

Having paid out a dividend equivalent to 4.6 per cent of income in 2017, the fund is targeting a gradual payout ratio increase to 5.8 per cent in 2020. Projections on its current assets point to an increase in rent from €14.6 million to €17.9 million over the period.

While returns on the fund, which is part of Davy Real Estate’s €1.4 billion of assets under management, have been driven in recent years by capital growth, the managers of the portfolio said that the Irish commercial property sector is now entering a new phase.

“Over the last three years, of the 15 per cent per annum returns achieved across the universe of Irish funds, over 65 per cent was driven by capital growth,” the latest quarterly report states. “As the Irish market matures and the capital growth rates begin to slow, we believe that income return will begin to drive a bigger proportion of overall returns.”

The current fundraising – with a minimum investment of €100,000 – is aimed at high-net-worth individuals, pensions and corporate treasury managers seeking income in an ultra-low interest rate environment. The new money will be used to enhance the value of existing assets, and to target new investments in key urban locations, mainly in Dublin.

During the first quarter, the fund acquired two additional units in Nutgrove Shopping Centre for €2.5 million, increasing its holding there to 67 per cent. It also leased out 83-85 Patrick Street in Cork city to Bestseller, a Danish fashion brand which trades under a number of labels.