Sale of K Club appears to be stuck in the rough 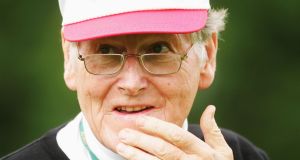 The Owner of The K Club Dr Michael Smurfit: he may yet have to lower the asking price on his trophy asset

Paper and packaging magnate Michael Smurfit will ring in the new year still the owner of the five-star K Club resort in Straffan, Co Kildare.

The former Ryder Cup venue was put up for sale by the 82-year-old businessman in June for a reported €80 million. However, the process appears to be stuck in the rough.

Rumours circulated during the week that the hotel and golf complex had been taken off the market, and that a major international hotel brand might be brought in instead to operate the 550-acre resort, which is roughly 45 minutes from Dublin.

Sources say estate agents Savills continue to run a process, with a number of parties still at the table. Yet progress is slow.

Concerns over Brexit, Donald Trump’s chest-beating on trade wars, and stock market wobbles are an unhelpful backdrop for the sale, particularly efforts to land an international buyer.

In addition, while the facilities are unquestionably top class, the return on investment from the K Club over many years has been below par. It has been consistently loss-making.

Competition for high-rolling Yanks is also stiffer, with JP McManus’s lavish spending on Adare Manor and his ambition to host the Ryder Cup there likely to be a big draw for American visitors.

Smurfit might yet have to lower the asking price on his trophy asset, and it could be the summer before the Monaco resident gets to sign his card on a 30-year association with the Kildare resort.