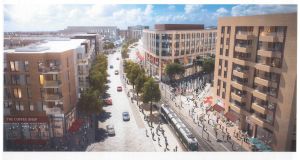 Cherrywood will ultimately have 8,000 new homes, as well as offices and shops.

Developer Hines and financial backer APG Asset Management are eyeing major sites in Dublin as they prepare to spend €1.1 billion on building 3,000 apartments in the city.

Hines and its partner, a Dutch fund manager, plan to build 1,269 apartments in Cherrywood town centre to the south of the capital, the first of a total of 3,000 they intend constructing in Dublin at a likely cost of €1.1 billion.

The move, sparked by the city’s housing shortage, means that they will spend €700 million more on residential building than the pair originally planned.

Brian Moran, managing director US-based Hines Dublin office, confirmed that the company intended bidding for sites that are put up for sale in the city to fulfil these plans.

“Any very large sites in Dublin city centre, we will be in there bidding,” he said. Mr Moran did not name any of the locations in which it was interested as it has signed confidentiality deals with potential sellers.

However, reports have named the company as a potential buyer of sites in the city’s docklands and elsewhere.

US-based Hines is the lead developer at Cherrywood and has spent two years putting in the infrastructure needed for the overall project.

The area will ultimately house 25,000 people in 8,000 homes on 412 acres, which will include a town centre with offices, shops and other businesses.

Hines has hired builders Sisk as the main contractor for the for the first part of Cherrywood’s development, which will create 300 construction jobs.

Overall Cherrywood will generate about 3,000 construction jobs over the project’s lifetime.

Hines and APG will rent out the apartments, a mix of one-, two- and three-bedroomed units, rather than selling them.

Planning law obliges them to provide about 130 of the Cherrywood units for social housing. They will rent the rest at market rates.

At present, two- and three-bed apartments are letting for between €2,000 and €3,000 a month in areas near Cherrywood.

Mr Moran indicated that the market would determine what his company would charge when it rented out the apartments, which would be in 2020 and 2021.

Minister for Housing Eoghan Murphy who launched the scheme, noted that the Government was trying to boost apartment construction through measures such as removing height limits to allow more of them to be built on individual sites.

“As we do that, it’s important that we reform protections for renters as well,” he said. “One of the key parts of that is going to be the Rent Bill that I will be bringing to cabinet , it’s going to bring greater protection for renters, greater security of tenure, greater rent transparency and stronger enforcement of our rent protection zones as well.”

Mr Murphy added that the Government wanted to see landlords and tenants agreeing leases longer than the one-year periods that are most common here.

The Minister observed that this was beginning to happen but said he was looking at proposals to encourage it.

Cherrywood is in a strategic development zone, which is meant to ease big projects through planning, once they meet criteria set out for the area.

Hines built roads, utilities, sports facilities and parks before applying for planning permission for the apartments, shops and offices.

His company hopes to attract others to build homes on parts of the Cherrywood zone. “Most of the major home builders are looking at opportunities here,” Mr Moran said.

Dublin-listed Cairn Homes bought two plots of land for €21.5 million in 2016 and plans to build 300 houses.