How the humble Irish chipper could fall victim to Brexit

Most chippers here import their potatoes from Britain 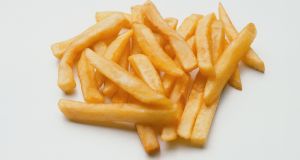 To make the ideal white chip, the potato in question has to have a low sugar content or else they’ll brown too quickly.

The traditional Irish chipper may turn out to be one of the more unlikely victims of Brexit. Most chippers here import their potatoes from Britain, a supply line that’s looking increasingly at risk from the UK’s increasingly fractious EU divorce.

Why do we import spuds to make chipper chips? The potatoes we grow – predominantly Roosters – don’t make good chips. To make the ideal white chip, the potato in question has to have a low sugar content or else they’ll brown too quickly.

The chipper industry here typically imports Marquis or Maris Piper varieties grown on the east coast of Britain, which have been specially stored at a certain temperature to ensure the sugar content remains low.

Irish potatoes are stored at cooler temperatures, which results in more of the carbohydrate being converted into sugars, which means they don’t fry well.

The peculiarities of the chipping industry explains why we imported 72,000 tonnes of our national staple last year, predominantly from Britain, while growing about 350,000 tonnes for the domestic market.

“There is an opening in the market for Irish growers to specialise in that type of storage and grow those varieties and supply into the chipping trade,” according to Tom Keogh, Dublin potato farmer and founder and managing director of Keogh’s Crisps.

On why more Irish growers don’t supply into the chipping industry here, he says: “It just went to a default, the guys in the UK were a step ahead of the Irish growers. They developed their businesses, they got to such economies of scale that it’s very difficult to compete here in Ireland with the prices they can deliver them into the Irish market at.”

Might Brexit change that dynamic? It’s conceivable, particularly if supply lines are disrupted and prices change on foot of import tariffs. Mamma mia.