Revellers relieved as Copper Face Jacks is taken off the market 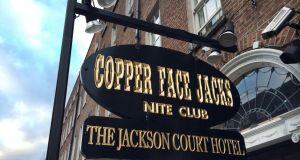 Alongside the 37-bedroom Jackson Court Hotel, Coppers went on the market in March for sale by private treaty

Late-night revellers can breathe a sigh of relief as landmark Dublin nightclub Copper Face Jacks has been taken off the market by its owners, having been put up for sale earlier this year.

Alongside the 37-bedroom Jackson Court Hotel, Coppers went on the market in March, for sale by private treaty. The property encompasses 28-31 and 35 Harcourt Street, Dublin 2.

Industry sources at the time suggested it could fetch up to €40 million, although Dermot Curtin of DC Curtin & Associates, who was appointed to manage the sale, said a strict sale price had not been set.

In a memo to staff dated November 6th, owners Cathal and Paula Jackson said they had decided to take the property off the market following Mr Jackson’s recovery from health problems late last year.

“As you know, Cathal had some health issues late last year and reluctantly made the decision to put Coppers on the market,” they said.

“The proposed sale was launched in March of this year and attracted strong interest. Several approaches were made.

“However, we are pleased to confirm that as Cathal has now recovered his health completely, he has decided to stay actively involved in the business. As a result, he has now formally withdrawn the property from sale.

“Cathal and Paula would like to express their heartfelt thanks to all their staff for their support during this time.”

At the time the planned sale was announced, Mr Curtin said the opportunity to acquire the premises was “one of those projects that come to market once in a generation”.

“The unbeatable trading location in the city centre ensures that future underlying values of these properties can only go one way,” he said.

“Add to this the exceptional profitability of the current business and the entire combination presents a very enticing opportunity for the market.

“Having spent much of their working lives creating and operating this incredibly successful business, the vendors understand fully what the property is worth and will easily recognise a fair and realistic offer, when it presents itself.”

Supermac’s boss Pat McDonagh was among those who signalled interest in the venue. He said he would examine the acquisition opportunity, and pointed out the nightclub was well established in Irish life.

The venue opened in 1996 and was extended several times. Fast-growing entertainment group Press Up was also rumoured to be interested, although a spokeswoman said it would not be buying the property.

The Jacksons have invested heavily in the business since acquiring it, including €4 million in capital expenditure since 2013. In 2016 the hotel added 10 bedrooms and the selling agent noted occupancy was in the “high 80s”.

Announcing the sale, Mr Jackson said: “Over the past 23 years I have been totally committed to setting up and establishing Copper Face Jacks as one of the most enduring and successful entertainment venues in Ireland.

“It is now time to hand over the reins to new owners who have the energy and the expertise to take Coppers to the next level.”

Coppers has become an institution over the years, with writer Paul Howard – the creator of Ross O’Carroll Kelly – creating a musical based on the venue.

It also got a mention at the All-Ireland senior football final when Dublin won in 2011. Having lifted the trophy, Dublin captain Bryan Cullen told the crowd: “See you all in Coppers.”